Advertisers spent $72.5bn on digital marketing in the US last year, an increase of 22 percent from 2015, according to a report by consultancy firm PwC for the Interactive Advertising Bureau (IAB).

“Mobile fueled the internet economy in 2016, with advertisers showing their confidence in digital to achieve their marketing goals,” said Randall Rothenberg, IAB’s president and CEO. “This increasing commitment is a reflection of brands’ ongoing marketing shift from ‘mobile-first’ to ‘mobile-only’ in order to keep pace with today’s on-the-go consumers.”

“Brand dollars naturally follow consumers, and you’re starting to see a mobile-first, and sometimes a mobile-only mind-set among marketers,” he said.

Mobile “dominated” the more recent growth in the industry, he added.

Digital audio was included in the report for the first time, generating $1.1bn in revenue last year.

Otherwise, advertising continued to be dominated by tech giants Google and Facebook — accounting for the majority of industry growth according to Pivotal Research, an equity research firm.

Seventy-three percent of advertising revenue in 2016 during the fourth quarter went to 10 companies, but the IAB declined to name which ones.

Aside from Google and Facebook, it is likely that Yahoo, Twitter, Snapchat and Amazon feature in the top 10.

Advertising revenue has been increasing for the past decade at a steady rate, despite a slight dip during the 2008/9 recession. 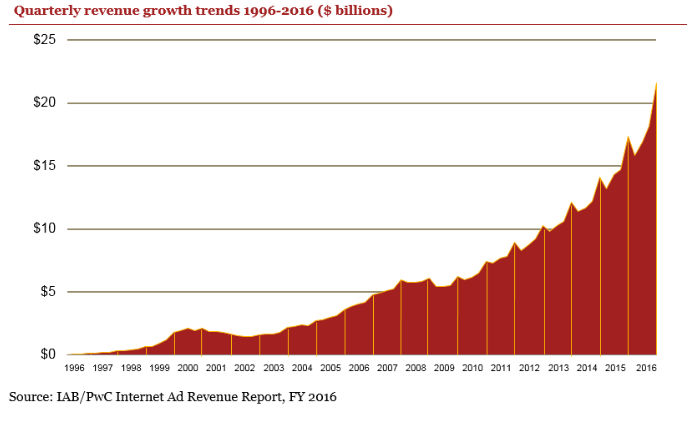 Overall, retailers were the biggest advertisers in 2016, making up 21.3 percent of total ad spending.