5G is being heralded as a major breakthrough in terms of speed and connectivity for users, but the possibilities could be a lot more innovative.

When it comes to the shift from 4G to 5G, the average user will most likely only be concerned with one thing: speed. Granted, you will be able to stream or download media on your smart device far faster than before. But behind the scenes, the technology being developed to bring us 5G has the potential to offer far more than that.

Service by the slice

A key aspect of unlocking 5G’s potential is network slicing, which enables distinct virtual networks to run over a common physical infrastructure. This means that instead of having physical phone masts supporting one network, the technology can support multiple digital networks running at once.

This has already been implemented over 4G networks using access point names (APNs), which are essentially a gateway between a mobile network and the internet, but the process is fairly cumbersome in comparison to 5G.

Network slicing on 5G is designed on an end-to-end basis, and as such doesn’t require going through APNs. It’s also dynamic, meaning it’s far more customisable than the current network slicing on 4G, allowing each virtual network to adapt depending on what is required from it.

This will lead to a proliferation in specialised networks for a range of services that are tailored to their specific needs.

Why you should care about network slicing

How does this come into play in real life? Well, with more customisation comes more flexibility, for all devices.

Ever been stuck at a big event and struggled with a data connection? Network slicing would give service providers the flexibility to offer better service in situations where there is an increased number of users trying to do similar things in the same place at the same time. For example, downloading maps before or after a sports event but uploading images or videos during.

There could even be separate dedicated network slices for services that require low latency connections, where the time between an instruction being sent and then being acted on is very short – think autonomous vehicles, internet of things devices or web-connected medical devices.

Network slicing will also guarantee that a virtual network can have a guaranteed maximum latency. For example, the network would guarantee that the slowest time a specific piece of data takes to be sent and processed is 1ms.

Think of it this way: you would want any data sent to or from your autonomous car or pacemaker to be processed as quickly as possible in the event of an emergency. 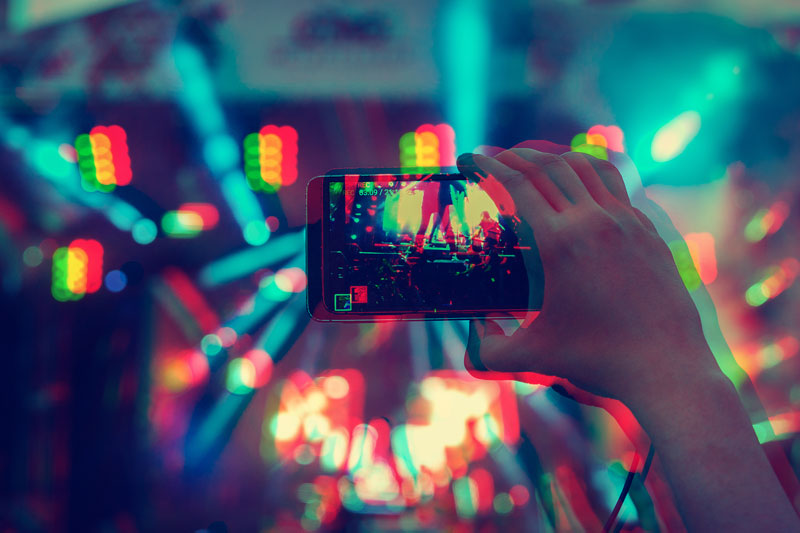 Network slicing on 5G can combat access issues at large-scale events such as concerts.

Media streaming without the data costs?

The technology could even prompt a shift in thinking from businesses that require customers to stay connected.

A streaming service such as Netflix that requires a high bandwidth network, but not necessarily the low latency that’s so crucial to other services, could potentially run its own virtual networks and absorb the cost into its subscription fees. At the same time, this could allow it to offer an enhanced multi-screen offering to its users.

This shift could lead to a situation where the telecoms provider acts as a wholesaler and Netflix becomes a mobile provider of sorts. On the other hand, existing providers could offer the same network in a ‘Netflix bundle’ type of add on.

Imagine: the data usage for your streaming services is already allocated and paid for as part of your subscription to that service, so you can stream content on the go without having to worry about it eating into your data plan.

Of course, this all depends on the 5G infrastructure being in place, which will certainly need to be standardised if customers are to receive the same level of service no matter where they roam.

While Vodafone recently announced that we’ll see its initial 5G launch this July, it will only roll out in seven cities initially. Meanwhile, the other major players will most likely follow the same approach by the end of the year.

With a lack of broader coverage geographically we might not all see the full potential of 5G in our day to day lives for a while longer. But if the coverage spreads, we could see the concept of content providers also offering the means of data delivery becoming a reality.

And with the peace of mind that a guaranteed low latency or high bandwidth networks brings, the result might just be more reliable and increasingly connected devices and services across the board. And faster speeds.

Read more: The 5G UK rollout is being slowed down by a law designed to speed it up