Earlier this week US president Donald Trump described the UK’s National Health Service (NHS) as “going broke and not working.”

Although many were quick to criticise him this description may hit too close to home for some in the NHS.

Nurses and doctors have been resigning from the NHS in droves over the past year, resulting in a very real under staffing problem in the UK.

In the 2016–2017 period, one in ten nurses left. When contrasted against the reduced number of nurses joining the workforce, this results in a decreasing workforce at a time when workload is increasing at a rate of 10 percent to 20 percent.

This has begun to place an incredible strain on the nurses and doctors of the UK as they have to deal with an ever-increasing workload due to both demand and under staffing, all while handling a pay cap disincentivising career progression in the UK.

This trend has a two-fold cause.

Firstly, the recent cap to nurse pay is forcing nurses to be sorely under compensated for an already gruelling job.

Secondly, fears by EU staff over their job security regarding Brexit negotiations is leading to 60 percent of polled staff seriously considering leaving their jobs while EU residents applying for UK jobs has fallen by as much as 90 percent.

This has led to pre-planned surgeries and operations originally scheduled for the winter of 2017 being postponed to the end of January 2018.

Additionally, the general short staffing concerns have caused ER wait times to hit all-time lows, with 77 percent of A&E patients receiving care within the first four hours of their arrival at an A&E centre. 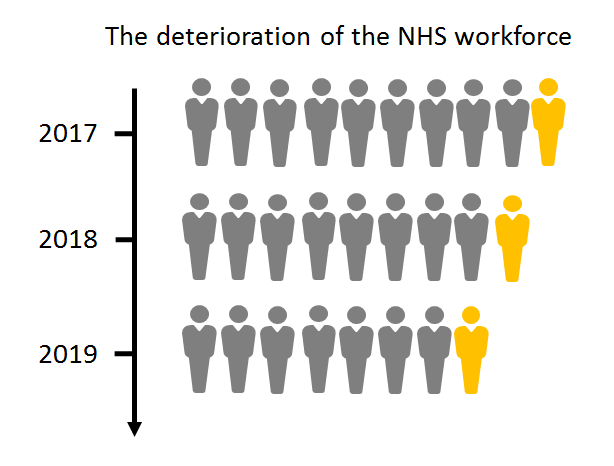 These delays and cancellations of service due to under staffing will cause the growth of the healthcare industry in the UK to slow down, if not regress.

As such, if the UK wants to keep the quality of care of its patients up as well as have access to new and innovative technologies, it will need to step up its medical investment.

In 2017, the NHS lost a tenth of its nursing workforce. If nothing is done to remedy this situation, the rate of attrition will only increase as nurses feel more and more of the burden.