The Bank of England’s semi-annual financial stability report, out today, has warned if the UK leaves the European Union without a bespoke trade agreement the consequences would be bad for all involved.

Prime minister Theresa May provoked anger amongst some economists and businesses when she said a no deal Brexit would be better than a bad deal.

While she was probably just bluffing to strengthen her hand going into negotiations many have taken her literally and produced warnings against the UK crashing out of the EU without some sort of deal in place.

So without a new bespoke agreement, UK firms could no longer provide services to EEA clients (and vice versa) in the same manner as they do today, or in some cases not at all. This creates two broad risks. First, services could be dislocated as clients and providers adjust. Second, the fragmentation of service provision could increase costs and risks.

It also warned “there could also be material dislocation of some services supplied from the UK to the EU”.

EU clients would need to source substitute services from banks and financial market infrastructures (FMIs) established in the European Economic Area (EEA) or other countries recognised by the European Commission as ‘equivalent’. This is particularly relevant to new debt and equity issuance and derivatives business. These dislocations could also disrupt the provision of services to UK clients who rely on EU counterparties. UK-located banks underwrite around half of the debt and equity issued by EU companies. EU companies could need to find alternative providers of this service to sustain their capital market issuance.

Why would a no deal Brexit be a problem?

If the UK has no secured a deal with the EU by March 2019 when it officially is set to leave the bloc it will fall back on World Trade Organisation rules, meaning it will have to pay far higher rates of tax to both export and import goods.

This will play all sorts of havoc with the financial services industry because, as the the Bank of England report explains, services are difference from goods.

What would it mean for investment into the UK?

In some Brexit scenarios, such as a no deal looking likely as we approach the March 2019 deadline, the BoE warned heightened uncertainty could mean foreign investors back further away from UK assets.

The UK relies on inflows of overseas capital to finance its current account deficit. That deficit, which stood at 4.4 percent of GDP in 2016, is financed largely through direct investment and portfolio investment in the form of long-term debt and equity.

As per the BoE report:

A material reduction in the appetite of foreign investors to provide finance to the United Kingdom would tighten financing conditions for UK borrowers and reduce asset prices and investment. 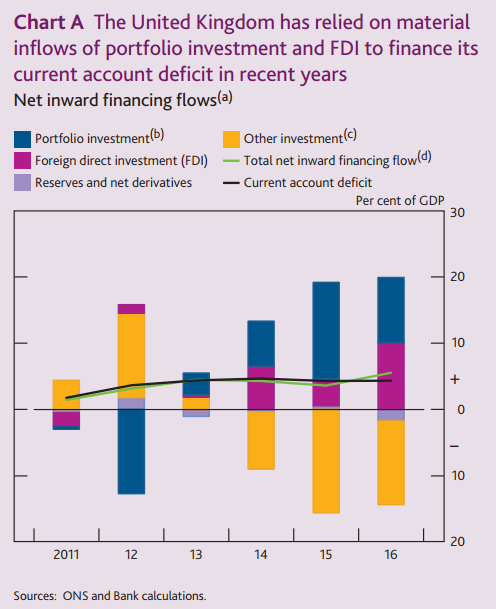