Cast your mind back to 2012. Back to a time when you would order a taxi by flagging one down on the side of a road, or, god forbid, pick up a phone and call one.

Fast forward five years and Uber is one of the biggest companies in the world, the most successful unicorn startup, with a valuation of around $66bn.

The arrival of Uber heralded the arrival of the sharing economy into our lexicon, bringing with it companies like Airbnb, JustEat and Deliveroo.

This hidden economy, that barely existed five years ago, is set to be worth £140bn per year in the UK alone by 2025, according to a new report by PwC.

It’s not just in the UK where the sharing economy is having an impact.

The economy has had huge growth across Europe over the past two years, with its five key sectors generating revenues of £3bn and facilitating around £23.8bn transactions in 2015.

The UK is the fastest growing in Europe and this is only set to increase.

PwC expects the sharing economy is going to experience growth at around 60 percent, equivalent to an increase of £8bn over the year.

Slower expansion than previous years, yes, but it means this sector is still outperforming most others. 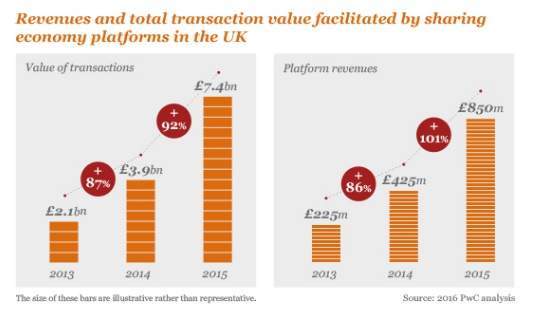 Revenue and transactions facilitated by the sharing economy

PwC forecasts that the growth in the sharing economy will permeate into other sectors, moving away from just automotive and hospitality.

The report suggested that healthcare might be an area where we see an expansion of sharing: for instance, medical equipment sharing platforms like Cohealo have emerged in the US so there could be similar startups making waves in Europe and the UK.

One thing that is impressive in terms of the sharing economy is its wide-reaching impact across the population. Over 50s are now the fastest-growing user group for platforms, including Airbnb and DogVacay, and it’s likely that this trend will continue.

This huge growth brings risk, as well as opportunity. Regulation is going to be enforced more across the industry over the next few years, demonstrated by the recent court case that took place in the UK where Uber lost the right to classify UK drivers as self-employed.

Examples such as this will continue to challenge existing business models.

Another area to keep an eye on is the interaction between the sharing economy and tax. PwC believes there are potentially big tax consequences from different applications of employment regulations, something the Uber tribunal demonstrated.

It will be interesting to see how governments and companies attempt to make the tax system work before in this sector.

The report sums up by stating:

“What’s clear is that the sharing economy is here to stay as an increasingly important component of our businesses and lifestyles. The UK has been at the forefront of growth and innovation in Europe’s sharing economy since its inception. But all stakeholders will need to re-double their efforts and embrace lessons from others if the UK is to be the home of the next billion-dollar organisation in the sharing economy.”

It’s safe to say we can expect to hear more disruption from this sector taking place over the next few years.