UK consumer spending fell for the third month in a row in July, the longest-running slump since February 2013, according to research from credit card giant Visa and financial services company IHS Markit.

Spending last month fell by 0.8 percent compared with the same period a year ago.

Transport and communications spending saw the most significant drop of 6.1 percent year-on-year, followed by clothing and footwear, which fell by 5.2 percent. 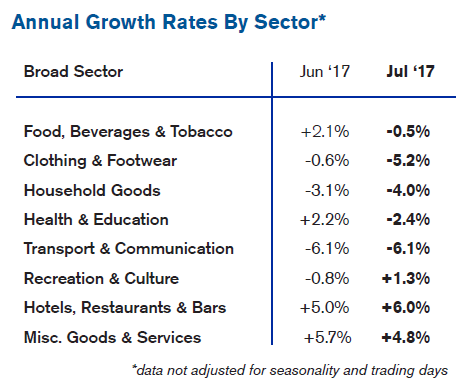 Food and drink spending was down by 0.5 percent annually, while spending on household goods fell by 4 percent.

Why are people spending less on transport?

The daily commute on buses and the underground is unlikely to have caused the dip in spend. It is more about consumers taking fewer flights and avoiding buying new cars.

The report indicates that the increasing popularity of staycations has contributed to a drop in flight bookings.

A fall in the value of the pound since the Brexit vote in June last year and rising inflation has not incentivised people to go abroad.

Inflation is currently at 2.6 percent and is expected to reach around 3 percent later this year.

People are also shying away from buying cars.

The number of new cars registered in July 2017 was 9.3 percent lower than in the same month a year ago.

In the first six months of 2017, the number of cars made fell by 2.9 per cent to 866,656, according to the Society of Motor Manufacturers and Traders (SMMT).

Reduced spending comes at a time when the UK economy has been expanding at a relatively modest pace, while households have been facing strong increases in living costs, and a slowdown in earnings growth. Notably, the latest ONS figures show total real pay falling at the quickest pace for nearly three years. Alongside the renewed squeeze on household budgets, uncertainties linger over the direction of the economy and the outcome of the ongoing Brexit negotiations, which is weighing down consumer confidence.