In an attempt to bolster regional connectivity and make airline travel affordable, the government of India has launched a campaign called Common Man Should Fly — Ude Desh Ka Aam Nagrik (shortened to Udan) in Hindi.

The scheme is expected to play a major role in boosting overall economic growth.

The scheme has created highly subsidised airfares on the first 50 percent of seats sold, capped at maximum 2,500 rupees ($37) across all participating routes.

The price is much lower than that of a taxi (costing 6-7 rupees versus 8-10 rupees per kilometre) along with a significant reduction in travel time; a boon for Indian travel, which suffers from an under-developed road network.

The government is providing a grant to the airlines interested in operating such flights and will be funded by a small levy per departure on all domestic flights with maximum certified takeoff mass not exceeding 40,000kg.

A part of the fund will also come from the respective states that have signed the Udan Memorandum of Understanding.

To be eligible for the additional state fund, an aircraft must have only 80 seats or less, irrespective of the route.

The majority of airports in the tier II and tier III cities affected by the Udan scheme do not have big runways, creating a challenge for regular aircraft.

Combined, these factors will lead to the induction of smaller aircraft along shorter routes, plus specialised crews to operate them.

The solution for this lies in the manufacturing of small aeroplanes: state-owned player Hindustan Aeronautics has already initiated a plan to manufacture 19-seater planes meant for regional connectivity.

Air India, the country’s state-owned airline operator, has shown an interest in procuring these small aircraft from Hindustan Aeronautics.

India and Russia have recently signed a bilateral agreement setting up a joint aviation manufacturing venture: the move primarily aims to cater to the needs arising from the regional connectivity scheme.

The scheme will add economic value by granting quick connections through the fastest mode of transportation; aiding tourism expansion, new business investments, generating employment, and sparking the opening of malls and hotels.

Furthermore, enhanced connectivity will also enable the movement of skilled workforce and business travellers to tier two and tier three cities for work.

A boost for tourism and aviation

A large number of tourist destinations, hill stations and pilgrimage centres in India are inadequately connected by air.

For instance, famous tourist cities such as Jaipur and Agra attract millions of international visitors in a year but there is no direct air link between them.

With Udan, access to difficult terrains, low lying, or hilly areas will become easier, especially in the case of medical emergencies or any natural calamities.

The scheme is expected to provide a new impetus to India’s domestic air travel industry.

The country witnessed a strong growth of about 23 percent in domestic air travel demand in 2016 compared to 21 perent in 2015.

The ministry of civil aviation estimates the number of domestic air passengers by 2022 to rise to 300m due to this regional connectivity scheme. 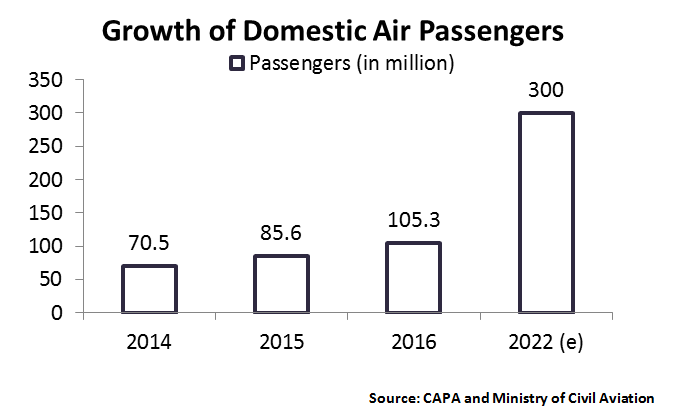 With all the positives of the scheme in mind, it’s easy to ignore the disruptions it can cause to the thriving road and rail transport industry.

As flights from Udan regions increase in popularity, air traffic in metropolitan areas will also rise, leading to air traffic congestion at all major airports in the country.

Countering this, airport infrastructure expansion plans are already in proposal for all the major cities.

The success of the scheme depends on the seamless and timely functioning of all collaborating stakeholders: the central and state governments and the airline operators.