Thomas Cook today issued an unscheduled update on its expected 2018 results in what essentially constitutes a profit warning.

The company’s shares plunged 29% to 34p in early trading as the trading statement announced underlying EBIT (Earnings Before Interest and Taxes) of £250 million, £58 million lower than FY2017 on a like-for-like basis and £30 million less than previously guided two months ago. 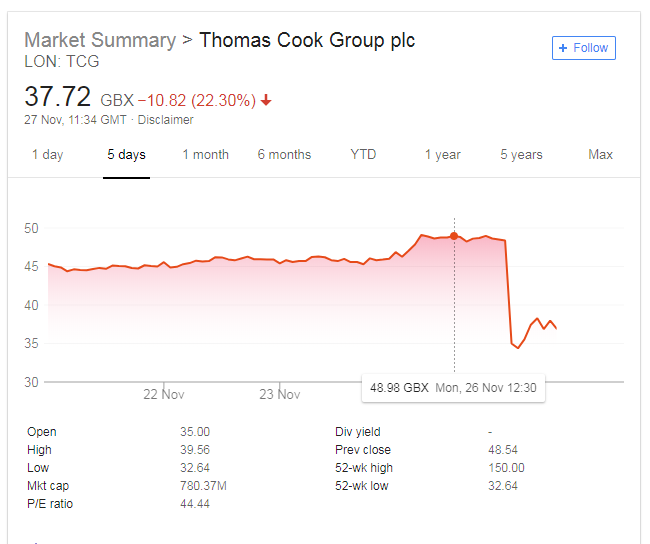 The company has been in an ongoing transformation stage for several years since experiencing severe financial difficulties in 2011, but has been making significant strides. Today’s announcement therefore represents a disappointment and signals that in some operations, Thomas Cook needs to act.

Unusual outside influences have played big role in company performance

In today’s statement, CEO Peter Fankhauser describes 2018 as a “disappointing year for Thomas Cook.” Given the numbers preceding that statement, he cannot argue otherwise.

Thomas Cook’s reasoning for the disappointing results is justified as far as external forces are concerned, but it also illustrates a need for a rethink on pricing policies.

A major driver of the poor results was the unusually hot summer experienced this year in the UK. Months of uninterrupted sunshine along with the feel good factor of England’s World Cup run made for a memorable summer.

The downside for a tour operator was that it reduced the need for sunshine getaways. Fankhauser leans on this when stating “the sustained heatwave restricted our ability to achieve the planned margins.”

Thomas Cook (or any other tour operator for that matter) cannot control the weather and the UK offers fantastic staycation options that appeal when the weather is good. However, Fankhausers’s allusion to “very high levels of promotional activity” hints at an issue Thomas Cook can influence: discounting.

Since the recession of 2008/09, consumer spending has been squeezed and companies selling products and services that constitute a discretionary spend have had to work extremely hard to convince consumers to part with their cash. The default go-to has been discounting and to some extent, this has worked.

However, it serves to alter consumer expectations and skews value perception. Many retailers and tour operators have fallen victim to this and Thomas Cook is no exception. What consumers now expect from a £600 holiday for example, far exceeds what they expected 10 years ago. If you don’t offer what people want and expect, they will not book.

This puts a huge strain on margins and the inevitability of discounts has created a brinkmanship whereby consumers do not book and ‘wait it out’.

For Thomas Cook this is an issue and the company itself has highlighted it by mentioning it in the trading statement. It would be a risk to move first, but greater pricing discipline and reducing discounts would help to improve margins.

At the moment, travellers believe they can get a great holiday for a reasonable price and they can. Tour operators have created this perception and only they can change it.

Thomas Cook can alter the balance of power, the question is ‘will it be brave enough to do so?’