Thursday, the dating app backed by Monzo founder Tom Blomfield, has just topped up its coffers with a £2.5m round. The former neobank CEO has not just shared his wealth, but also his advice on how to build successful startups without succumbing to stress. The Monzo founder famously left the challenger bank earlier this year, citing mental health issues.

“He is going to be a fairly key stakeholder with us,” Matt McNeill Love, co-founder and COO at Thursday, tells Verdict. “We’ve yet to define exactly how that looks, but he’s offered up his time. And we’ve got an unbelievably successful chap – a very nice chap as well – on call should we need his guidance. Because why make your own mistakes when you can learn from others?”

McNeill Love “won’t pass on private conversations” he and Thursday co-founder George Rawlings have had with Blomfield, only acknowledging that they’ve touched on the subjects of stress and mental health.

“I’m afraid our chairman’s advisors wouldn’t be too happy with us saying,” McNeill Love protests. “But I can give you a steer: it’s over [£10m] by quite a bit.”

Thursday dating: what’s that all about?

There’s been an explosion of dating apps in recent years. It’s easy to focus on digital love behemoths like Tinder, Bumble, Grindr, Her, OKCupid and Hinge, but there are also more niche romantic services.

Muzmatch caters to the romantically inclined within the Muslim community, Feeld is set up for people who don’t conform to heteronormative stereotypes, Inner Circle is for attractive professionals and Raya is the celebrity dating app Amy Schumer met her ex-boyfriend on. There’s even a dating app for people who hate the same thing, appropriately named Hater.

All these companies are vying for a slice of what’s expected to be a great summer of love once lockdown restrictions ease around the globe, meaning plenty of opportunities to make money for dating apps. The competition will be as hot as singles night in a stuffy nightclub.

Given the world’s singles are far from starved for dating app options, the question is what Thursday brings to the table. McNeill Love’s answer can be summed up with one word: scarcity.

The Thursday dating app is only available on Thursdays. Users can only search for, match and chat with would-be paramours for 24 hours on the fourth day of the week. Then, just like for Cinderella, the magic disappears at the stroke of midnight, with no chats or matches to be saved. The founders believe this encourages serious singles to set up dates directly and cut through plenty of time-wasting waffle.

“We just cut out really boring sort of, ‘Hey, how are you’ conversations that go on for weeks and weeks and weeks at a time,” McNeill Love says. “We just condense all of that into one day. It encourages people to act and go grab a drink after work.”

In order to create this full-on dating experience, the founder encourages introverts and people who want to know their matches better before setting up dates to stay clear of Thursday.

“If you are that way inclined: don’t bother coming on the app, because you won’t have a good experience and you’ll give other people a bad experience,” he warns.

Despite McNeill Love’s focus on Thursday creating an intense dating experience, he’s adamant that the startup isn’t a hookup service.

“We are not a hookup app, we are a dating app,” he says. “How people use that and what they do once they’ve gone on a date is totally up to them. We’re not going to judge people for whatever they do.”

But you better get on quickly if you’re interested in joining the Thursday dating community as things may get trickier soon.

“When we hit 100,000 active users, which we’re not far off doing – I don’t want to give away too much, but it will get harder to get on than it is currently, I’ll put it that way,” the founder says.

The Thursday team also claims to be able to minimise bad behaviour by using strict onboarding structures. To sign up, each user must prove their identity with a passport, driving licence or national identity card.

“What that means is that the people on there are real and it minimises bad behaviour and increases safety because anyone who is blocked or reported, and is found guilty of breaching our terms of service conditions, principles or code of conduct, they cannot get back on the app once we’ve blocked them,” McNeill Love claims. 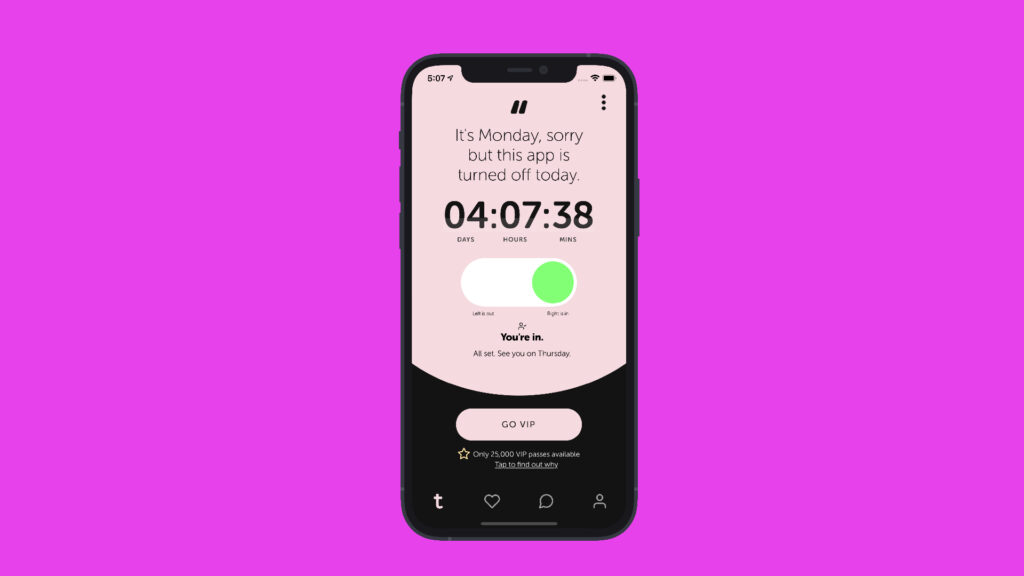 From Afghanistan with love

Thursday made its debut in London and New York on Thursday 27 May this year. It got over 100,000 likes and helped love-hungry singles secure almost 7,000 matches in one day. However, Thursday is actually not a new startup.

The company first saw the light of day in 2018. Back then it was called Honeypot and the idea was that users would log onto the app to find hot singles in their area. The app swapped Tinder-esque swiping for the ability for singles to check in at local places – such as bars and cafés – to meet other eligible partners in person.

At the time they came up with the original idea, McNeill Love was just about to start his final tour in Afghanistan, serving as a captain in the Welsh Guards. That meant Rawlings was left to lead Honeypot’s crowdfunding campaign on Crowdcube. The Crowdcube campaign ended up raising £117,290.

“It was bizarre,” McNeill Love recalls. “The odd few times I were able to get wifi to go back and see the campaign just go up and up and up – my god, it was extraordinary.”

McNeill Love says his military experience has helped him manage the startup team, to be resilient and overcome the challenges of being a tech entrepreneur.

“It’s not an easy game,” he says. “This is tough, and there are absolute setbacks and things don’t always go to plan. And I think experience in the military definitely set me up to that.”

One of the key setbacks happened when the founders realised that the Honeypot model needed “an absolute tonne of people” to work properly, users that it didn’t have. Recognising that something had to be done, they went to the pub to talk it over.

McNeill Love remembers: “We were in a pub in the City, my co-founder said to me, ‘Matt, how do we do something radical here? How do we get dating apps exciting again? And how do we make them fun?’

“We discussed it and came up with the idea to structure it all around one day. We knew we wanted to do it on Thursdays. And then, after another pint we was like, ‘What should we call it?’ ‘Let’s just keep it simple and call it Thursday.’ And so that’s what we did.”

In June 2020 they made the pivot official and rebranded Honeypot to Thursday. That just left them with one challenge: setting up a new dating app in the midst of a pandemic.

“That’s why we didn’t launch earlier, “McNeill Love says. “We were ready to do so, but we abide by social restrictions of the government, which is why we’re not live in Paris right now, why we’re not in Madrid right now. If restrictions in place mean two strangers can’t meet up outside, then we won’t launch. However, in the UK it is very okay to meet up. So it’s not a problem.”

While the Thursday team will wait to launch in new locations, it will use the new funding money to hire roughly 20 members to its development team. It has also recently hired a new head of growth, a head of marketing and a finance director. Mostly though, the founders will focus on scaling the startup.