US hiring slowed sharply in March with just 98,000 new jobs created according to data released by the Labor Department today. The figure was well below the 180,000 that Wall Street economists forecast .

Despite US president Donald Trump’s promises to bring back manufacturing jobs as part of his “America first” policy push, the latest US jobs report does not engender enthusiasm.

Manufacturing now accounts for just 9 percent of total employment. The low numbers reach back to 1941, with only 12.4m factory workers in the US, compared to 19.5m in the 1970s.

“It was a disappointing report with no silver lining in the details,” said Rob Martin, an economist at Barclays. “Service-sector employment weakeness points to a substantial slowdown in activity.”

March saw snowstorms sweep across much of the eastern seaboard, which may have slowed hiring.

The jobs numbers are “skewed by the weather-related effects of the big storm that hit the Northeast,” said Tony Bedikian, head of global markets for Citizens Bank. “My view is that it’s going to be likely dismissed by the markets. There are some positives within the report.”

However, there’s no need to blame the jobs slump on the weather. Trump’s reassuring words and tweets seem to be working a treat.

According to a recent survey by the National Association of Manufacturers (NAM), a staggering 93 percent of its 14,000 members are positive about the US manufacturing sector.

“This is the highest in the survey’s 20-year history, up from 56.6 percent one year ago and 77.8 percent in December,” said Jennifer Drogus, director of media at the NAM in a statement when the survey was published last month.

Trump has had some moderate successes. There were 28,000 new manufacturing jobs in February, partly owing to rising oil prices fuelling demand for machinery. Manufacturers added another 11,000 jobs in March.

“We certainly saw a sizable jump in manufacturing hiring last month,” said Sam Bullard, an economist at Wells Fargo. “That said, I am not so sure we will be able to maintain this current pace over the course of the year.”

Over the past few months, Macy’s, which just two years ago was the largest US department store by retail sales announced plans to close 63 stores. 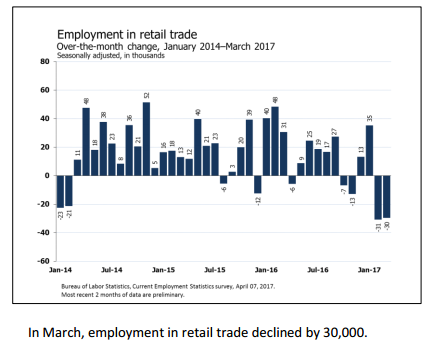 “Let’s face it, retail stores are trying to figure out what is the proper balance between brick-and-mortar and online sales. If you do take that number out, it’s not quite as bad a jobs report,” said JJ Kinahan, chief strategist at TD Ameritrade, a brokerage firm based in Omaha, Nebraska.

The unemployment rate fell from 4.7 percent to 4.5 percent– its lowest in almost a decade. Wage growth slowed to a year-on-year pace of 2.7 percent from 2.8 percent.

The Federal Reserve will decide whether to tighten monetary policy in the summer, after increasing rates by a quarter point in both December and March.