The US and the UK are leading the world in intellectual property (IP) policy, with countries like Pakistan and India slipping lower down the index.

Over the past five years, the International IP Index has attempted to gauge the global IP environment.

President and chief executive of the GIPC, David Hirschmann, said:

“Intellectual property (IP) standards are essential to the success of any 21st Century economy. It provides the living and growing roots that stimulate innovation and bolster growth.”

The global trade in IP licenses is huge. In 2014, it was worth more than $273bn, around 1.6 percent of global trade and rising.

IP crime, on the otherhand, costs economies hundreds of millions of dollars each year.

The problem of global counterfeiting has more than doubled since 2008, amounting to $461bn annually.

In 2014/15, UK officials detained 1.6m consignments of IPR-infringing goods at the border, with a retail value in excess of $69m. 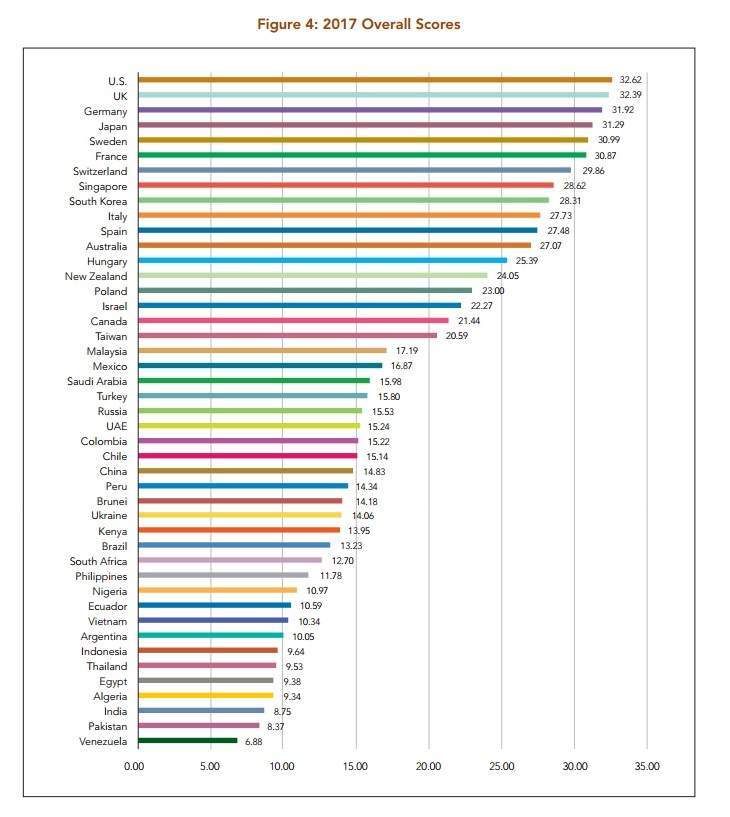 The total score of 45 countries on the IP Index

According to the Index, 2016 was a challenging year for global IP Policy. For instance, a strengthened global benchmark for IP standards was delayed by political opposition to the Trans-Pacific Partnership Agreement (TPP), which the US eventually withdrew from.

The Index pointed out issues in India had caused the country to slip down the list.

The Indian government issued the National Intellectual Property Rights policy in 2016, yet IP-intensive industries in the country continue to face challenges with regard to the scope of patentability for computer-implemented inventions.

This is worth noting, particularly with India’s burgeoning technology scene.

The Indian government issued the National Intellectual Property Rights policy in 2016, yet IP-intensive industries in the country continue to face challenges with regard to the scope of patentability for computer-implemented inventions.

This is worth noting, particularly with India’s burgeoning technology scene.

Pakistan entered the Index for the first time as an emerging economy.

However, the country placed 44th on the list as a result of high counterfeiting and piracy rates in the country, as well as a significant discrepancy between IP rights in law and level of practical enforcement.

It has begun making steps to rectify it, such as by introducing specialised IP courts and capacity building aimed at streamlining and improved decision making.

However, there were also positive developments in IP policy in 2016.

For instance, countries including China and Sweden introduced new enforcement mechanisms and specialised IP courts to better combat counterfeiting and piracy. In addition, Taiwan began a review of its IP laws in an effort to better comply with the standards included in the TTP.

Japan’s score has increased by 10 percent since 2016’s results due to the ratification of TPP and accession to the treaties covered in the Index.

The UK ranked second out of the 45 countries on the list.

It was applauded for having a strong and sophisticated national IP environment, particularly as 2016 saw a dedicated push by the UK government to step up the fight against online piracy.

Despite the uncertainty raised by Brexit, the country remains one of the highest-rated economies in the Index.

Software is one of the most important sectors in the UK in terms of investment and IP. Investment in copyright, including software, was around £33.3bn ($41.4bn) in 2011, according to the Intellectual Property Office (IPO).

The reduction of online piracy is a top priority for the IPO.

According to a recent study by the IPO on online privacy, published last year, only 15 percent of internet users were accessing illegal material – the lowest rate of illegal access since the study started in 2011.

The Digital Economy Bill introduced in Parliament in July 2016 proposes to increase the maximum sentences for online copyright infringement from two to 10 years.

“It is no accident that the UK’s IP enforcement regime has once again been recognised as the world’s best. This ranking reflects the dedication and hard work of skilled enforcement partners across the country.

“There is of course work still to be done and we face new challenges – especially in our fight against online piracy. A strong partnership between government, businesses, and law enforcement will help us continue to build on our success.”