On Twitter, Brexit is one of the most popular hashtags used in relation to the UK’s upcoming General Election, more so than even the NHS, according to a report published today by the think tank, the UK in a Changing Europe.

In the last month, Brexit was the fourth most common hashtag used on Twitter, mentioned a total of 935,456 times, more than twice as often as the NHS was mentioned. 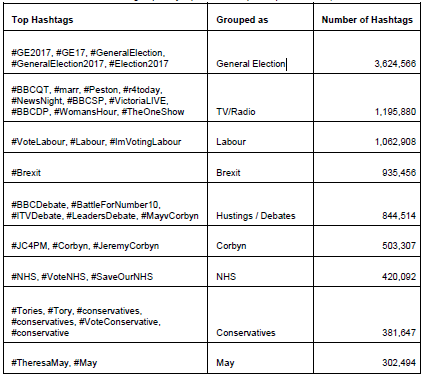 The only other political issues to feature in the top twenty hashtags were the co-called “dementia tax” and a potential second Scottish referendum on independence. 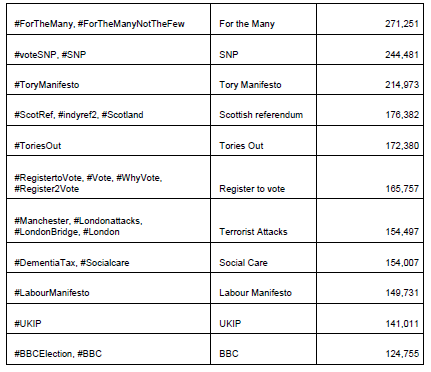 “The appearance of the Scottish independence question as the thirteenth most common hashtag employed in the discussion of this election is particularly striking, given the UK wide nature of the data collection and the likely more localised interest in this issue in Scotland,” said a UK in a Changing Europe spokesman.  “A sustained appearance of Brexit as an issue is visible throughout the campaign period.”

Pro-Labour sentiment dominates the Twitter conversation around the General Election, according to the report.

“If the current polling is to be believed Jeremy Corbyn is unlikely to fair as badly as was anticipated when the election was first called,” explained a UK in a Changing Europe spokesman. “Traditional media sources were slow to pick up on this change in public opinion whereas the pro-Labour and, to an extent, pro-Corbyn trend could be seen early on in social media and throughout the month of May.”

The Labour leader was retweeted many more times in the last month than Conservative prime minister Theresa May, who doesn’t even appear in the top 20 most retweeted accounts. 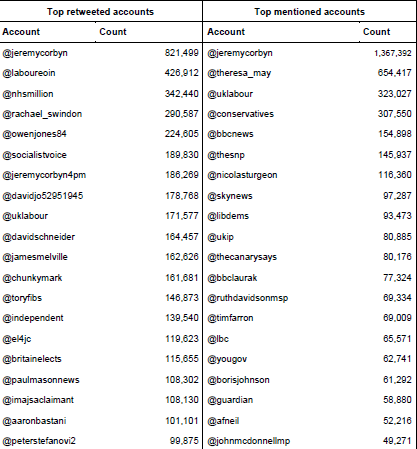 How much can Twitter tell us about what the public are really thinking?

“Tweeters are typically highly motivated and perhaps those who initially see themselves as the underdogs in the debate, excluded from mainstream coverage. This may explain the surge in pro-Labour social media activity that subsequently developed a life of its own and has ultimately had to be acknowledged by the mainstream media. This also fits with the high presence of the SNP in our data set, with the Scottish debate marginalised at the UK level.”

However, Clare Llewellyn, post-doctoral researcher at the University of Edinburgh’s Neuropolitics Research Lab warns that Twitter is just one of many indicators of public opinion, and should not be seen in isolation.

“Twitter is of course not representative of the voting public as a whole, and therefore not necessarily a clear reflection of “the many, not the few,” she said.

“However, whilst Twitter cannot be used to predict elections and the overwhelming support we see for Labour and Jeremy Corbyn may not be fully reflected in the ballot boxes, it is a useful tool in allowing us to gauge the mood of those who are motivated enough to comment in social media,” she added.