As the UK faces what looks to be the hottest day on record, the latest figures on solar capacity growth have been published – and the results are fairly disappointing.

While the figures, which are at this stage highly provisional, show an increase of 1.8% in UK solar capacity since June 2018, the rate of installations has dropped significantly.

Furthermore, 90% of the installations in June of this year were of low capacity panels with the ability to generate no more than 4kW of power.

According to the UK government, the reason for this stalling of solar capacity growth in the country is the end of the Feed-in Tarrifs (FiT) scheme, which closed to future applications on 31 March 2019.

Under the scheme, UK households received payments for surplus power generated through renewable sources, such as solar, which was fed back into the national grid. This was designed to incentivise such installations, giving an additional financial benefit to installing solar panels.

With the scheme now closed, decentralised renewable technologies are less financially appealing. As it stands, excess power will still be fed back into the grid, but households will not be paid for it.

This is translating into dramatically fewer installations. In June it was reported that home solar installations had dropped by 94%, putting the UK solar industry in severe jeopardy. 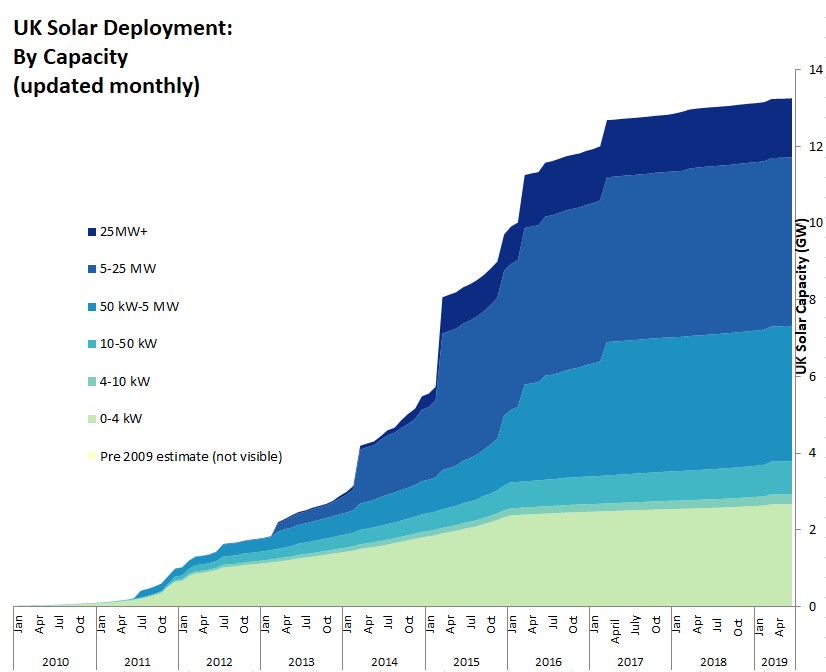 While the situation may seem dire, a replacement for FiT is planned in the form of Smart Export Guarantee, which is currently being considered by the UK government.

Seeing this as a potential saviour, the UK solar industry has been keen to back the plan, with some going so far as to launch their own scheme modelled on the proposal.

In May Octopus Energy launched Outgoing Octopus, which it describes as a “true export tariff”. Under the scheme, Octopus buys solar panel owners’ excess energy and sells it on to the grid.

However, with solar set to be vital to achieving the country’s renewable energy targets, there is a growing need for the UK government to formulate firm regulations to encourage more solar capacity growth.

“The closure of the FiT hit UK solar hard. As we push for a cleaner, more sustainable energy system it is absolutely imperative that the UK government commit more to helping renewables such as solar,” Molly Lempriere, editor of digital magazine Future Power Technology, told Verdict.

“As a nation, we provide the biggest subsidies for fossil fuels in the EU, some £10.5bn a year, and yet we are not subsidising solar power. The technology has developed hugely in recent years and the price of it has dropped dramatically, but it is still a relatively young technology and one that as a nation we need to foster and grow.”

And with a heatwave currently rocking the UK, now is the time to take action.

“As heatwaves become increasingly common, other power sources are struggling in conditions that are perfect for solar,” said Lempriere.

“The large amount of water needed for nuclear has recently caused plants in France to shut and similarly generation from wind power has declined as hot temperatures often mean low wind levels. We need more solar to give our energy systems the resilience only diversification can bring.”

Read more: Google launches Project Sunroof in the UK, but is the country ready to embrace solar power?