Mid-sized businesses in the UK have boosted their overseas turnover by 50 percent in the past five years, according to a new report.

By comparison, trade for FTSE350 and small businesses has fallen by nearly 30 percent in some instances.

According to a new report by BDO, the accountancy and business advisory firm, mid-size businesses have grown their international turnover from £84bn to £127bn since 2011.

Despite the concerns over how Brexit might affect international trade, mid-sized firms have offset this worry by increasing overseas trade by 7 percent from 2015-2016.

At the higher end of the scale, FTSE350 companies have seen their international turnover fall by 14 percent, from £425bn to £366bn, with these companies suffering a 30 percent loss in 2016 alone.

BDO is calling for the UK government to put mid-sized businesses at the centre of a new economy in the post-Brexit world. The firm believes these companies are overlooked and undervalued, and should be considered when the government prepares to invoke Article 50 later this week.

“High-performing and entrepreneurially-spirited mid-sized businesses are the economic engine of UK international growth.  Despite all the uncertainty of the past twelve months these companies have taken calculated investment risks and prospered.

“The success of these businesses should not be taken for granted and, with Article 50 being invoked in two days’ time, it is crucial that the Government factors the needs of these mid-sized businesses into their thinking ahead of negotiations”.

When it comes to the Brexit negotiations, there are concerns that Britain will not continue to have access to the single market. Europe remains the biggest market for UK exporters; Germany alone contributes £32.3bn to the UK international export market. France comes third, contributing £19.4bn to UK exporters. 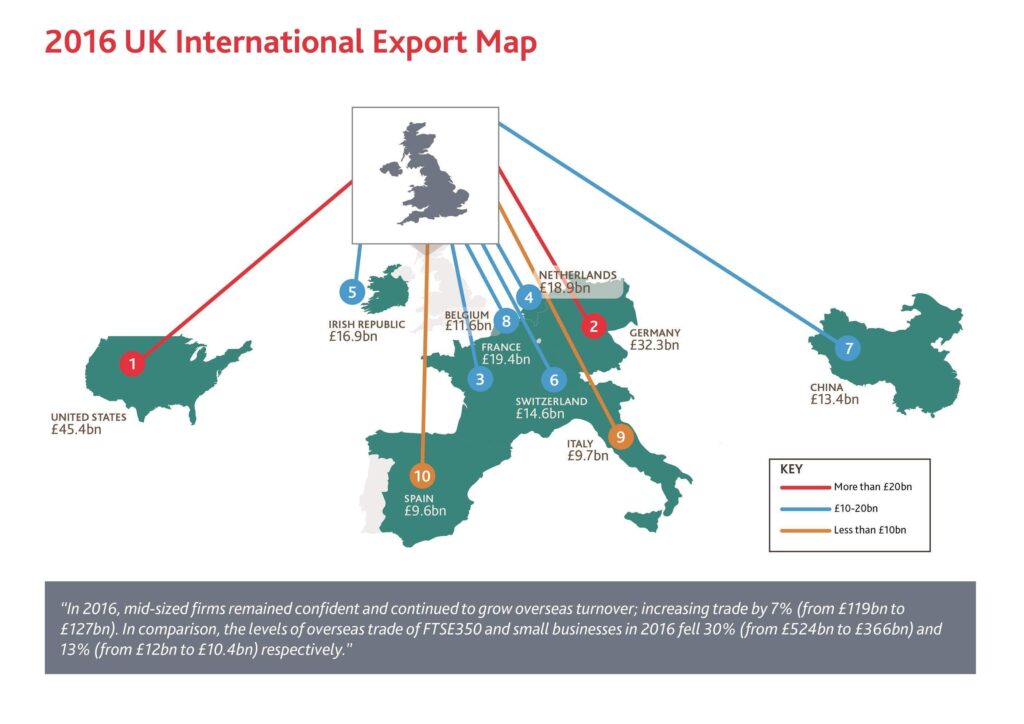 The firms that BDO surveyed for the report raised concerns about how their exports and business interests abroad will suffer if tariff and non-tariff barriers are imposed. As well, restricted access to global talent and skills could also affect UK businesses, whatever their size.

In total, 80 percent of the firms surveyed said they believe the EU will damage their prospects. However, it wasn’t all doom and gloom. Around 65 percent of businesses said they will continue to invest during the next two years and two-thirds are predicting positive growth in the next 12 months.

In addition, difficult events such as the depreciation in the pound have appeared to have worked well for exporters. Scott Corfe, head of macroeconomics at the Centre for Economic and Business Research, believes this can make UK businesses appear for competitive.

“Already, the depreciation in the pound seen since the referendum appears to be stimulating exports, as UK goods and services have become more price competitive to overseas buyers,” said Corfe.

And, the hope of entering new growing markets, which Britain can negotiate its own position in, could be beneficial for businesses too.

“Brexit could serve as a catalyst for the UK economy to focus beyond Europe, building trading relations with faster-growing economies in the East, bringing a host of benefits,” he added.

Though Brexit raises challenges for all firms in the UK, the overall consensus is that this is a challenge they can rise to.