When it comes to getting a reaction out of financial markets and traders it seems the Donald’s tweet is mightier than Kim Jong-un’s missiles, according to research from Goldman Sachs.

Goldman bankers wrote in a note to clients:

In a year during which the Vix otherwise had the pulse of a rock, North Korean missile launches appeared to be one of the few sources of volatility [and] we find evidence that it is the US reaction to North Korean testing – and president Trump’s Twitter account in particular – rather than the testing per se, that matters most for global risk appetite as reflected by the Vix.

Read more: Why is North Korea launching missiles? Here’s what Kim Jong-un is trying to achieve

Goldman’s data revealed that on several occasions the Vix completely shrugged off missile tests but moved much more closely with Trump’s tweets on the subject.

The chart below suggests “a strong relationship between Trump’s tweets and the Vix”, according to the bank and could be taken to mean markets are more concerned that Trump will do — or tweet — something rash, than Kim Jong-un will follow through on missile threats.

From a statistical perspective, testing does not appear to matter at all unless president Trump tweets about it. 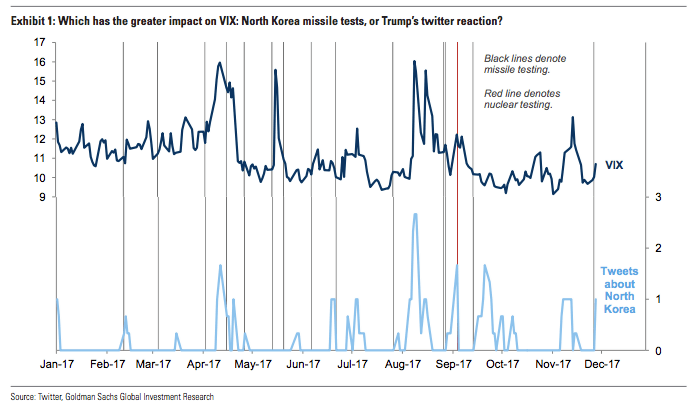 Last week investors and analysts appeared unfazed by the latest North Korean missile tests with Japanese markets barely moving after an intercontinental ballistic missile landed in waters about 250 kilometers from its northwest coast.

Investors had already expected that North Korea would continue to test fire a missile. Also, some market participants have already sold off shares on the risk recently. The important thing is the US response, but US equities didn’t seem to react to the launch and Washington didn’t respond to the issue much yet. In the previous launch, the US showed a strong response and that affected the US-China relations.

But this time, I don’t think the North Korean issues will affect the relations between US and China because they recently had a summit between Xi Jinping and Trump, reaching a consensus on North Korean affairs. I don’t expect any unexpected noise on the market.

In recent weeks, the Trump administration has sent mixed signals to North Korea — with the US president calling on North Korea to “come to the table” to make a deal to end its nuclear program in a recent trip to Asia while criticising secretary of state Rex Tillerson’s attempts to negotiate with the country.