What is 5G actually for? The use cases most commonly cited include autonomous vehicles, the Internet of Things (IoT), and smart cities, but these all require more than just fast, responsive networks if they are to become pervasive. What is 5G in business and what are the main considerations?

The term ‘5G’ does not refer to a single specific technology. While the fifth generation of mobile technology will be based on the IMT-2020 standards, developed and approved by 3GPP, 5G is perhaps best understood as a marketing concept, similar to the way that previous generations (3G, 4G) were loosely mapped to IMT specifications. 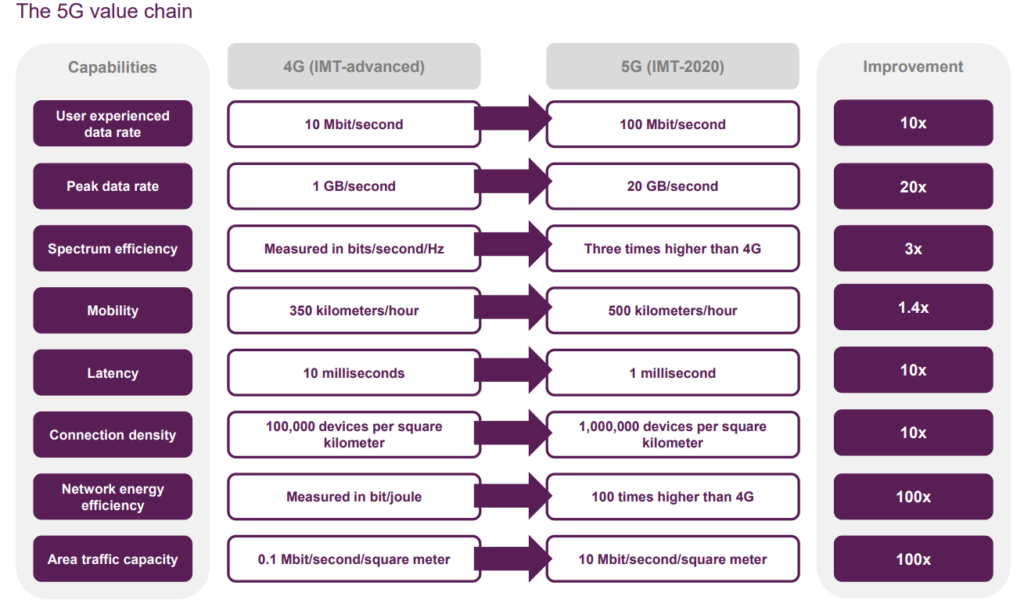 Why does 5G matter for business?

Previous wireless generations have delivered increased bandwidth and capacity but 5G will go further, adding low latency, high density and improved reliability. These capabilities will be fundamental to the provision of emerging technologies such as autonomous vehicles and augmented reality, which will have a major impact across industries. In recent years, telecom operators have struggled to turn growing demand for mobile data services into revenue growth, but 5G will open up a range of fresh revenue streams, particularly in vertical markets like energy and utilities, manufacturing and healthcare. A 2017 study from Ericsson estimated that the 5G-enabled revenue opportunity for operators would be worth around $582bn by 2026.

The race to be a leading player in 5G is well underway, with governments eager to harness the economic benefits of the technology, which include GDP growth and job creation, while at the same time ensuring they avoid the negative implications of falling behind.

What are some of the big themes around 5G?

5G is capable of supporting a wide range of frequency bands, from sub-1 gigahertz through to 40 GHz and above, as well as shared and unlicensed spectrum. Consequently, operators can choose from a number of different deployment strategies.

Fixed wireless is an oft-overlooked 5G use case

The International Telecommunication Union (ITU) splits use cases for 5G into three main categories: enhanced mobile broadband, with high-definition video and augmented/virtual reality (AR/VR) as notable early applications. Massive machine-type communications, enabling the growth of the IoT by supporting the rapid growth in the number of connected devices and ultra-reliable and low-latency communications, most commonly discussed in relation to autonomous vehicles but also important for the application of IoT in verticals such as healthcare and manufacturing. Initial 5G deployments will involve an often overlooked use case, namely fixed wireless broadband.

The shift to 5G will require a significant capital outlay, due to the need to deploy many more cells to ensure adequate propagation of higher frequency spectrum, associated high capacity backhaul requirements and assorted other costs like new spectrum licenses. Operators will, therefore, be looking for strategies that allow them to deliver cost-savings and increase efficiencies while, at the same time, supporting new 5G-enabled service lines and revenue streams.

What is the history of 5G?

The impact of 5G on mobile subscriptions is set to be even more dramatic, once the technology becomes available. The first 5G subscriptions will appear in 2019, but there will be fewer than 5 million worldwide. However, by 2023 the total will have increased to nearly 850 million, at a phenomenal CAGR of 271%. The share of mobile subscriptions that are 5G is expected to jump from 0.05% in 2019 to more than 8% by 2023.

While 2G has largely been surpassed by newer generations of cellular technology in countries such as the US, where it is expected to make up less than 2% of subscriptions in 2018 and Japan, just 1% of 2018 subscriptions, it has shown greater resilience in less-technologically advanced regions. In the Middle East and Africa, for example, 2G will account for 45% of all subscriptions in 2018, while in Emerging Asia, a regional subcategory that incorporates 35 countries including Bangladesh, China, India, Indonesia, Malaysia, Myanmar, Pakistan, Philippines, Sri Lanka, Thailand and Vietnam, 2G is expected to make up nearly 35%.

However, these numbers will start to collapse over the coming years as 3G and, more significantly, 4G penetration increases. By 2023, 4G will have a 41% share of subscriptions in the Middle East and Africa, while in Emerging Asia 4G is forecast to command 71% of mobile subscriptions in 2023, with the total number of 2G subscriptions in the region expected to fall by nearly 1 billion in the five years between 2018 and 2023.

The last few years have witnessed an explosion in the amount of data transmitted across mobile networks. Indeed, the need for greater capacity to cope with this increased volume is one of the reasons why 5G has developed significant momentum. Global mobile data traffic will hit 208 million terabytes (TB) in 2018, up from just over 30 million TB in 2014 with a CAGR of 62%. Growth is expected to continue over the five years to 2023 although the CAGR will be lower, at 26%.

The 5G story… … how did this theme get here and where is it going?