Oh no, Darren Aronofsky’s Mother! is shaping up to the a serious box office disaster. In fact, it might end up being the mother of all box offices disasters!

The film, starring Jennifer Lawrence and Javier Bardem, cost $30m to make. So far, it has only managed to recoup $13.5m in its opening weekend. The film has proved seriously, seriously divisive too.

But most damning is the recent ‘F’ rating that Mother! has been given by CinemaScore, an independent audience polling firm.

What is an F rating in cinema?

Unlike reviews and critical feedback, CinemaScore asks live audiences to reveal their feelings on a film immediately after seeing it.

Essentially, the folks from CinemaScore show up at tonnes of movie theatres on a film’s opening weekend and hand out a load of ballot cards. After watching the film, the audience gives the film a grade from A to F.

You can see the ballot cards that CinemaScore uses below: 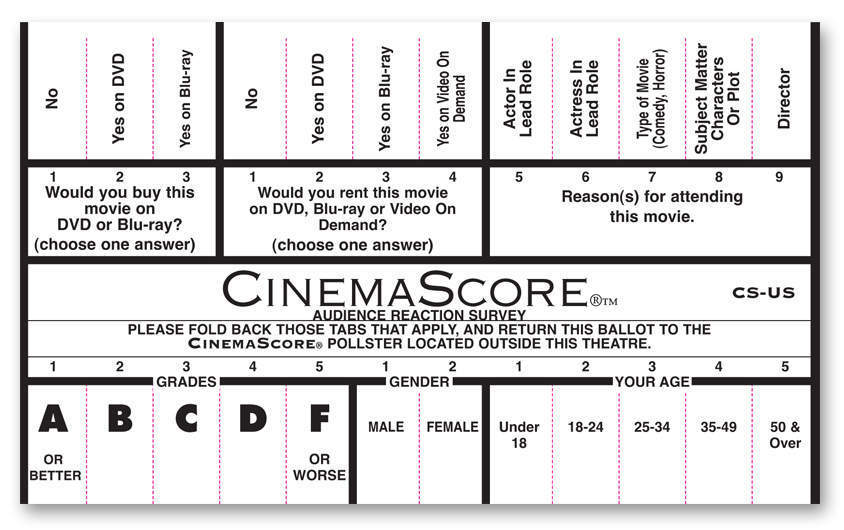 Speaking to the Las Vegas Review-Journal in 2016, the firm’s founder, Ed Mintz explained the scoring system:

A’s generally are good, B’s generally are shaky, and C’s are terrible. D’s and F’s, they shouldn’t have made the movie, or they promoted it funny and the absolute wrong crowd got into it.

It’s that last point that probably explains why mother! got such a terrible grade, in spite of the average reviews it got elsewhere: essentially, Paramount Pictures screwed up the advertising for the film. And actually, watching the trailers and reading the reviews, it isn’t hard to see the gaping gulf between them.

Why did Mother! get an ‘F’ rating?

Okay, let’s take a quick look at how Mother! was advertised. Here’s the first trailer that was released:

Now, I don’t know about you, but to me, that is definitely a trailer for a horror movie. At the very least, a violent, pretty scary thriller.

However, here’s a passage of the review from the website of famed-critic Roger Ebert:

People will write lengthy interpretations, some of which will contradict each other, and I think that’s a major part of what Aronofsky wants here—to work in a style that allows for various readings of the film and no easy answers. Those looking for a straight-up horror movie should definitely look elsewhere.

The likelihood is that most members of the audience were simply annoyed by a film that they weren’t expecting. After all, if you pay good money to go and see a horror film, you’re bound to be frustrated if you’re shown something which is patently not a horror film.

You wouldn’t feel too happy if you paid good money to see a rom-com and were shown an action-thriller, would you?

Ultimately, it was the film’s marketing which cheated this film out of a better rating.

Then again, that’s not necessarily to say that mother! is a good film either. As I wrote at the start of this article, the film is divisive. Plenty of CinemaScore’s test audience probably really did think Mother! deserves an ‘F’ rating, regardless of merit.

But perhaps an audience who might have been more open to the film would have attended it had the marketing sold it better.

And the fact that mother! hasn’t even recouped its budget potentially proves that the marketing didn’t even work on that level either. Someone at Paramount is probably getting fired…

They’re basically just down to the particular audience who saw that movie. For example, the critically-panned The Emoji Movie managed to get a B grade and that has an approval rating of just 10 percent for critics and 41 percent for audiences on Rotten Tomatoes.

On the other hand, the universally-adored Shutter Island has only managed to win a C+. Say what you will about Shutter Island‘s failings, but you can’t honestly tell me that it was worse than The Emoji Movie.

But here’s the thing, CinemaScore might not actually be a rating for how good a film really is. It’s a rating of what the audience thinks. Some truly uninspired films are beloved by audiences, while a few outstanding gems never quite find their audience. So instead, CinemaScore’s rating might be a better indicator of how a film will perform at the box office than how good it is.

And if anything, that seems to hold up judging by the early box office returns of mother! It might be a fine film, but it will probably go down in history as a box office bomb.

What other films were given ‘F’ ratings?

The following are several of the other films which also got list ‘F’s. As CinemaScore doesn’t keep a public archive of which films gained which grades, I wasn’t able to track down which are the final two films to receive ‘F’s since 2004.

As you can see, plenty of the films on the list are psychological thrillers and horrors.

Maybe there’s just something about this genres which is difficult to market, or maybe the genre is simply very easy to get wrong!

Topics in this article: Films