Advertising giant WPP has reported its like-for-like net sales fell by just 0.1% in the first quarter of the year, better than the 1% decline analysts predicted, causing the company’s share price to spike.

That the company’s financial performance was not as bad as some feared is a muted bright spot for the firm, which lost longstanding chief executive Martin Sorrell earlier this month after he resigned amid misconduct allegations. Sorrell has rejected the claims made against him.

WPP’s share price plummeted by 38% over the last year due to lower advertising spending by big brands and challenging trading conditions.

However, shares rallied on this morning’s results announcement, rising by more than 7% an hour after the market opened.

WPP said revenue for the quarter was down 4% at £3.6 billion and reported net sales down 5.1% at just under £3 billion.

However, these numbers are strongly influenced by the pound’s recovery against the dollar, in which WPP earns most of its income. If currency effects are removed, first quarter revenue was up 2% and net sales rose 1%. 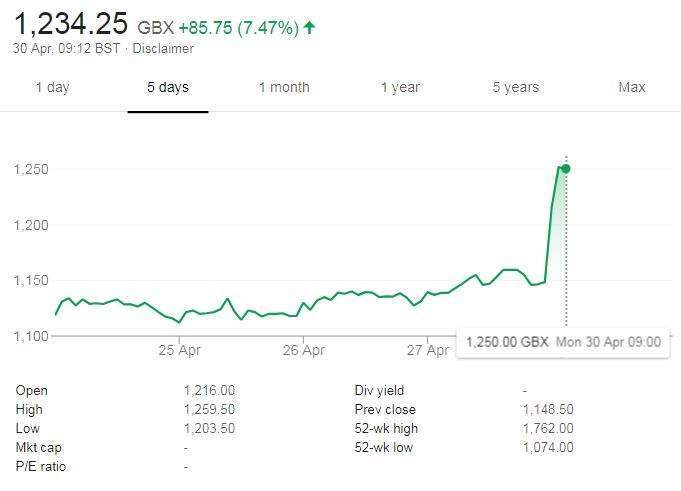 In the turmoil following Sorrell’s departure, rumours have swirled that WPP might break up.

Kantar, WPP’s underperforming market research arm, might be the first to go after CVC Capital Partners reportedly made enquiries about a potential sale.

Kantar, which accounts for around 15% of WPP profits and 18% of its revenues, is valued around £3.5 billion.

While Read and Scott say they are reviewing the strategy of the firm, downplaying speculation that WPP will be broken up.

In a joint statement, they said:

We intend to build on [our] strengths by taking a fresh look at our strategy, developing a vision for the group that recognises the challenges and opportunities presented by the structural shifts in our industry, and executing resolutely against it.

Our priority is to focus on growth. We will proactively address the under-performing parts of our business and we need to ensure that our capital is deployed to those areas that will grow fastest and maximise shareholder value.