A new UK immigration system will “not be ready” by April 2019, the scheduled date for the country’s formal departure from the EU, according to the Institute for Government (IfG), a British think tank.

The “successful implementation of a new immigration system by April 2019 is unfeasible — not just for government, but also employers, landlords and providers of public services,” the report said.

“The political imperative for change in immigration is significant, but so is the administrative challenge. The scale of the task – creating a new immigration system – is huge and it is critical that Government gets it right,” said Jill Rutter, Brexit Programme Director at the IfG in a statement.

“The current process for dealing with permanent residence applications from EU nationals is not fit for purpose, as the government itself acknowledged. It needs to be streamline as a matter of urgency and as a first step towards a new post-Brexit system,” she added.

The process for registering EU nationals is “not fit for purpose” and as many as 5,000 extra civil servants may be needed to deal with a deluge of residency applications, the report also said.

An estimated 3m people from EU countries currently live in the UK. 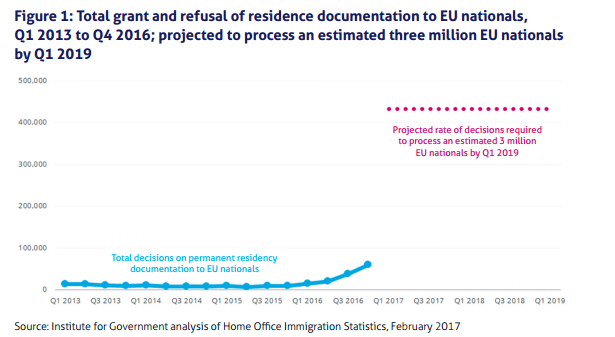 The Home Office is already hiring additional staff, with 240 hired in Liverpool to process residency applications.