Air France passengers are facing disruption to flights today due to workers striking in protests over pay, sending the Air France share price lower at the market open in Paris.

The Air France share price was down 1.6% in early trading, after the airline said that the long-running strikes have cost it around $270 million. 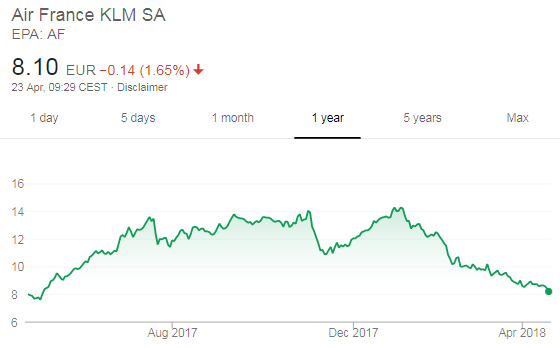 Air France has warned some 25% of its flights would be cancelled today, the tenth day of a strike by staff. About 28% of the company’s pilots are expected to strike, with one flight attendant in five expected to walk out.

The industrial action began in February, amid a bitter pay dispute. Air France has offered staff a 2% pay rise but the unions have demanded a 6% rise.

In a statement yesterday the airline company said 65% of its long-haul and medium-haul flights will be carried out from the Charles de Gaulle international airport in Paris.

On Friday Air France launched a new consultation period with staff members to try to end the dispute.

Meanwhile, rail strikes are also causing chaos in France. No trains will run between France and Italy today, while two-thirds of trains within France have been cancelled on Monday.

France’s TGV high-speed trains will not run two out of five trains today with 70% of long-distance services cancelled. Three out of four trains run by the low-cost subsidiary Ouigo have been cancelled today.

Eurostar has said 20% of its services will be affected and has cancelled 15 trains between London and Paris over the coming two days, and a further nine services linking London with Brussels.