Aldi’s sales rose 12.4 percent year-on-year in the 12 weeks to 29 January, taking its market share to 6.2 percent, overtaking the Co-operative as the fifth largest UK supermarket. 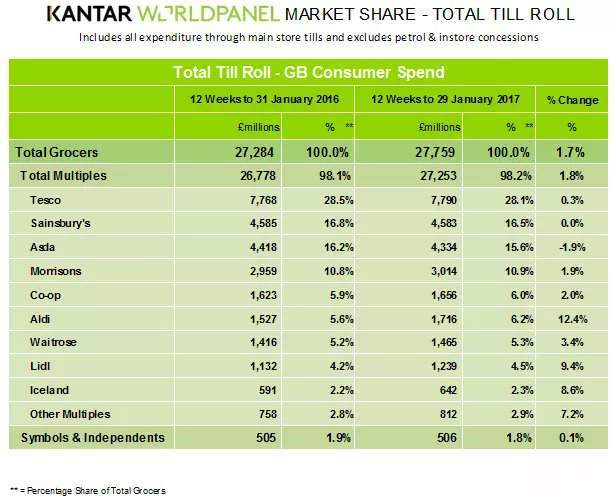 “Just a decade ago Aldi was the UK’s 10th largest food retailer, accounting for less than two percent of the grocery market. Since then the grocer has grown rapidly, climbing the rankings by an impressive five places,” said Fraser McKevitt, the head of retail and consumer insight at Kantar Worldpanel.

The supermarket’s success story is part of a wider trend.

Of the big four UK supermarkets, only Bradford-based Morrisons gained market share in the period, rising to 10.9 percent.

Sainsbury’s sales were flat year on year, while Asda, the British arm of Walmart, saw sales drop by 1.6 percent.

Although Tesco saw a small 0.3 per cent increase in sales, the Hertfordshire-based retailer still dominates the UK grocery sector, with more than 28 percent of the market.

Aldi and Lidl, another German-owned low-cost supermarket chain are certainly making their mark in the UK. They collectively control nearly 11 percent of the country’s grocery market

Aldi boasts almost 700 UK stores, and plans to open a further 300 over the next five years.

In the past quarter the supermarket attracted 826,000 more shoppers than it did during the same period last year.

The grocer’s impressive rise is a warning sign for big industry players, who continue to lower prices and launch new product ranges in response the increasing competition.

Aldi has already started stocking special offer flower bouquets in time for Valentines Day next week, including 100 red roses at a bargain price of £25 ($31).