Amazon is progressively increasing its presence in the retail sphere, from the acquisition of up-market grocer Whole Foods for $13.78bn last year to the opening of its first physical store, Amazon Go, in Seattle in January.

This week the retail giant has announced its entry into the pharmaceutical retail space by acquiring online pharmacy PillPack. Here we look at the acquisitions that saw Amazon go from a small online bookseller to world’s biggest e-commerce company, valued at $842bn.

To date, Amazon has completed 86 acquisitions since 1998. 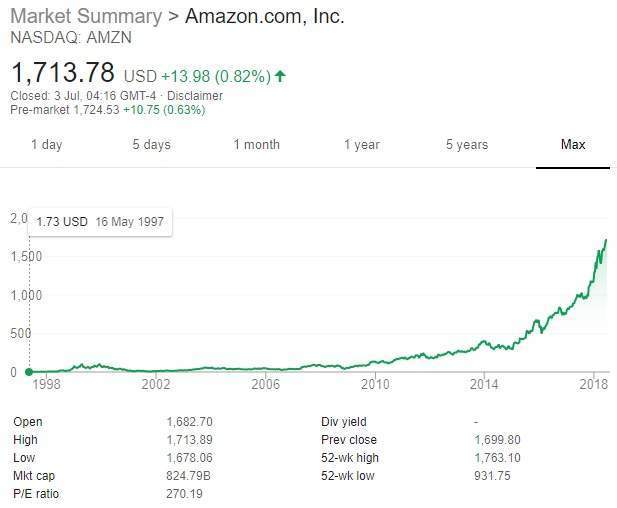 Founded by an independent company in 1996, Alexa has been owned by Amazon since 1999 after a $250m deal. The now popular device was originally a website where data on internet browsing was transmitted after being collected by a special toolbar.

Amazon bought into the Chinese market with a $75m purchase of Joyo.com. The company markets the same core items as Amazon, including books, music and videos. It is was the largest online bookseller in China at the time. As part of the deal, Amazon also gained possession of several Chinese subsidiaries and affiliates controlled by Joyo. It was Amazon’s second entry into the Asia-Pacific region, where it also operates a site serving the Japanese market.

Amazon’s acquisition of Audible was a move to bolster its audio download offering, as it has been building a digital music store to compete with Apple’s iTunes, and has signed deals with major music companies such as Vivendi’s Universal Music Group and Warner Music Group Corp. Amazon acquired the company for $300m.

Zappos – an online-based clothing retailer – wanted to join forces with Amazon in order to increase both companies’ bottom lines, increase sales, bring better customer service and continue to move forward in their online business concepts. Amazon completed the $1.2bn transaction in 2009, allowing Zappos to retain its management team and run the company under the same brand.

The UK-based company, with over 14 million customers across several countries, was acquired by Amazon for $312m. Lovefilm allowed Amazon – which already had been selling films on Blue-ray, DVD and PC as well as video games – to sell more online video. The deal helped Amazon to better compete with US streaming giant Netflix.

Quidsi, the parent company of diapers.com and soap.com, was acquired by Amazon for $500m. Reportedly, Amazon’s CEO Bezos believed he could make things a little more easy for parents by giving them the ability to get diapers delivered quickly to them at low prices. As well as taking over the company, Amazon has also acquired $45m of Quidsi’s debt.

Amazon purchased Kiva Systems, a technology company that builds robots that are designed to work around warehouses, for $775m. The acquisition allowed Amazon to fulfill growing sales, as the robots are designed to zip through the centres collecting orders off shelves and bring products directly to the workers. It was one of the largest acquisitions by Amazon to date.

Twitch Interactive is a video game streaming company that allows users to create their own channel and not only play games, but create commentary about the game they play. It was acquired by Amazon for $1bn. Google was also rumoured to be interested in acquiring the company.

Amazon acquired the Israeli chip start-up company founded in 2011, for $370m. The deal between the companies allowed Amazon to use Annapurna’s chip design to make its AWS cloud computing business more efficient and cost-effective.

Founded in 2006, Elemental is a company that provides software to enable the delivery of multi-screen video content. Amazon acquired the company to help it deliver content over PCs, tablets, phones and TVs for $296m.

Souq.com is the Arab world’s answer to Amazon. It is a retail marketplace that features over 8 million products in 31 different categories, including fashion, health, beauty, electronics and baby products. At the time of purchase, the site had millions of visits each month and Amazon has recognised that together they could boost both companies’ sales and capabilities. Amazon paid $580m for the company.

The $13.7bn deal to buy the upmarket US-based grocery chain was Amazon’s biggest acquisition to date. With Amazon on board, Whole Foods will be able to benefit from the same type of technologies that Amazon has brought to the other stores.

The maker of wire-free home monitoring systems was acquired by Amazon for $90m. The deal allowed Amazon to sell Blink’s indoor and outdoor home security systems, as well as its video doorbell. The acquisition took place a couple months after Amazon launched its Cloud Cam security camera.

Amazon increased its foothold in the smart home space by acquiring a smart doorbell maker Ring.  Amazon kept the core of the Ring business intact while integrating its work into the Amazon ecosystem. The $1bn purchase should help Amazon’s overall hardware business, as well as provding competition for Google’s Nest.