The Apple share price has stabilised ahead of the iPhone maker posting its second-quarter results later today.

S&P Global Market Intelligence has forecast Apple will post sales of $61 billion, an increase of 13% year-on-year, though it expects June iPhone shipments will not meet expectations.

Apple has lost billions in stock market value over recent months, though it continued to impress in its last quarterly results from February this year — posting higher revenue than anticipated and hitting records within the company, despite negative expectations. 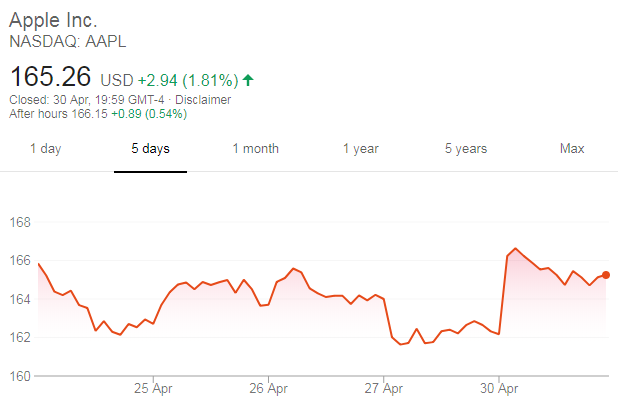 We clearly saw from Apple’s previous earnings report that the iPhone X was a smash hit. Apple’s move to broaden its iPhone price points has been incredibly successful, allowing new entry points at $350 with the iPhone SE and expanding the top end all the way up to $1,150 for those who want the newest design and technology.

The iPhone X’s popularity helped Apple’s average selling price rise to new heights. New iPhones do tend to sell best at launch and then taper off somewhat, so some slowdown should be expected.

But more than that is improbable: after selling the iPhone X to early adopters, did demand simply fall off a cliff? Anything is possible, but I am sceptical. It is really dangerous to infer trends from individual supply chain sources.

Shares in Apple trade some 10% below their March all-time highs amid gathering concern that the iPhone X has failed to spark a major upgrade cycle in the smartphone market, as its high price tag and evolutionary rather than revolutionary nature has persuaded even hardened Apple-holics to wait to replace their cherished devices.

Growth in inventories – finished parts – has soared and outstripped growth in sales. This would suggest that key customers have over-ordered and now pulled back their requirements for future quarters.

Meanwhile, consumer analysis firm Consumer Intelligence Research Partners (CIRP) found that newer iPhone models made up 60% of all iPhones sold in the US, down from 78% from the previous year.

The iPhone X was the least popular out of the newest editions with 16% of sales.

The iPhone accounts for 62% of Apple’s trailing 12-month revenues, so analysts will be looking at any weaknesses in its sales and marking Apple down. Analysts are negative ahead of Apple’s earnings announcement because of gloomy trading updates from key Apple suppliers such as Qualcomm, TSMC and Samsung, warning that iPhone sales are slowing down. Services revenues – which represent around 13% of revenues – may, by contrast, surprise on the upside.

However, Apple could appease investors in other ways. It is likely to return $100bn to shareholders following recent US tax reforms that allow it to repatriate overseas earnings at a reduced tax rate. In February, Apple announced that it had a $163bn net cash pile which it would return to shareholders in coming years. If it announces a quick return, this may help its share price.

Growing concerns decreased Apple’s stock price by 9% a week ago, causing the company to lose $80bn of its stock market value.

Mould noted that there is still hope for the multinational tech company.

Apple still has $286 billion in cash and cash equivalents on its balance sheet, so it can ramp up both its dividends and share buyback programme, should it choose to do so.

Since the initiation of such payments and cash returns in the first calendar quarter of 2013, Apple has returned $160 billion to shareholders in buybacks and paid out $61 billion in dividends – equivalent to 25% of its current market capitalisation – and during that time its net cash pile has grown by a sixth to $163 billion. Sceptics will argue that Apple has taken on $122 billion in debt to fund the dividends and buybacks, potentially leaving itself with some awkward liabilities at some stage, especially if anything goes wrong with profits.

Bulls will counter the firm only took on the debt because lofty US taxes left its cash trapped overseas, adding that the Trump tax cuts and reforms solve that problem. As such, Apple’s second quarter should be a fascinating litmus test.

International trade fears have also arisen for Apple, after US President Donald Trump threatened to impose tariffs on thousands of products from China.

Apple CEO Tim Cook met with Trump last week as Taiwan and Hong Kong are one of Apple’s largest markets and manufacturers.

Trump stated he would impost $50 billion of US tariffs on Chinese imports, which caused China to react with tariffs of $3 billion of US imports. Trump then threatened an additional $100 billion in tariffs.

In order to accommodate this additional figure, mobile phones may have to be targeted, as well as computers, which would lead to a price rise at Apple.