Today in a meeting with British prime minister Theresa May, French president Emmanuel Macron confirmed the loan of the Bayeux tapestry to England.

The medieval art work is one of great significance to both countries, as it depicts the Norman invasion of the UK in 1066.

The tapestry depicts the events leading up to the Battle Of Hastings in which Norman invader William The Conqueror’s forces slayed English king Harold Godwinson.

It’s also the original source of the long-held belief that Godwinson was killed with an arrow through the eye.

Other interesting elements include the first ever recorded depiction of Halley’s comet. Another first is the depiction of the harrow, a newly-invented piece of agricultural equipment.

One interesting fact about the tapestry is that it isn’t technically a tapestry. This is because it was embroidered rather than woven, thus it cannot be defined as a tapestry.

You can see the Bayeux tapestry in full here

Who made the Bayeux tapestry?

There are plenty of different explanations as to where the Bayeux tapestry came from.

In French legend, it is said that Queen Matilda, William The Conqueror’s wife, and her ladies in waiting created the tapestry to celebrate her husband’s victory.

More likely, however, is that the tapestry was commissioned by Bishop Odo, William’s half-brother. Thus, scholars think that the tapestry was actually created in Kent (Odo’s main base of power) not Bayeux. It’s also thought that Anglo-Saxon needleworkers would have worked on the tapestry, not French ones. Other evidence to support this is the vegetable dyes used in the piece which are common in Anglo-Saxon art. Also, some of the Latin text contains hints of Anglo-Saxon phrasing.

But all that being the case, why is it called the Bayeux tapestry? The name comes from the location is was discovered. The tapestry had been lost to history until it was rediscovered by scholars in 1729. The scholars found that Bayeux Cathedral in France had been displaying the tapestry annually, hence the name.

Where has the Bayeux tapestry been displayed?

As one may have guessed, the Bayeux tapestry is predominantly displayed in Bayeux, Normandy, France. The tapestry actually has its own museum, Musée de la Tapisserie de Bayeux. Guests can go and see the tapestry every day of the year, aside from the month of January where the museum is annually closed.

However, in its nearly-1000 year history, the Bayeux tapestry has, on occasion, been displayed elsewhere.

The tapestry came to Paris in 1804 while Napoleon planned his invasion of England. After he abandoned this plan, the tapestry was once again displayed in Bayeux Cathedral. 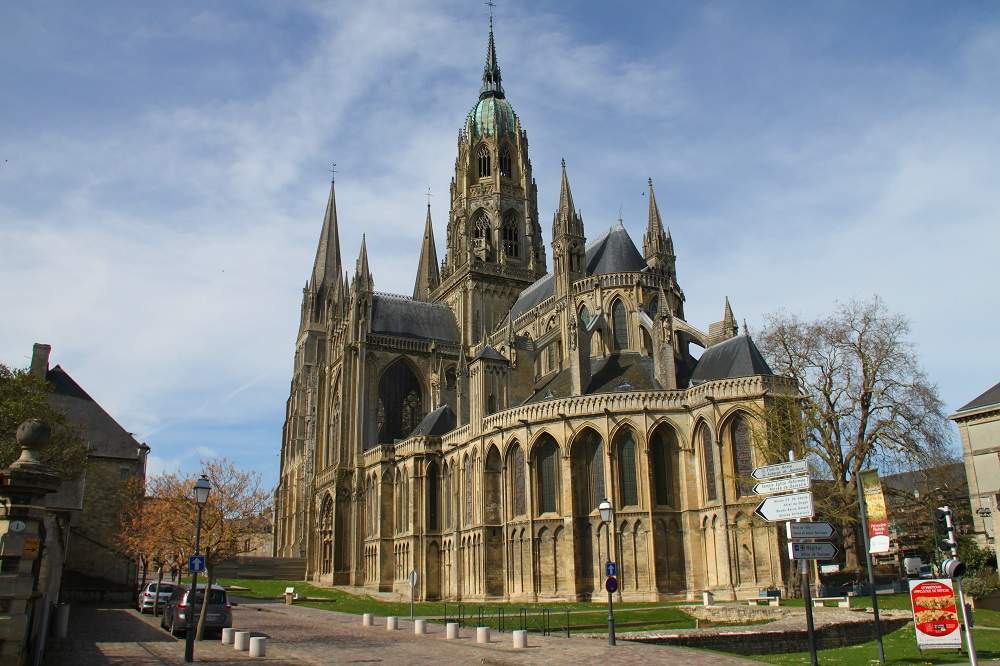 During the Nazi occupation of France in the second world war, the tapestry was taken to Paris for safe-keeping. There, it was displayed in the Louvre. A message intercepted by Bletchley Park suggested the Germans planned to take the tapestry to Berlin.

However, Paris was liberated before they had the chance to do so. After the war, it was returned to Bayeux where it has stayed ever since.

Since at least 1476, when it was mentioned in an inventory of treasures at Bayeux Cathedral, the tapestry has never returned to England. A request was made for it to be displayed in the UK in 1953 for Queen Elizabeth II’s coronation, but the French government turned this down.

Another request was made in 1966 for the 900th anniversary of the Battle Of Hastings.

However, a full-size replica was created in 1885 which is displayed in Reading Museum to this day.

Where will the Bayeux tapestry be displayed?

The first thing to remember is that there is some chance that the tapestry may never come to the UK. Macron’s offer is subject to tests confirming that it is safe for the tapestry to be moved. Given its age, it may be unsafe to move the tapestry. There will also have to be evidence that British authorities and historians can properly care for it.

Subject to all these tests, the loan of the tapestry is set to occur in 2020 or shortly thereafter.

However, the question as to where it will be displayed is still up for debate.

In the original report about the story, the Times claimed the British Museum in London was going to receive the tapestry. They would create a temporary exhibition around it. Considering the museum gets nearly 7m visitors per year, that would definitely ensure it gets seen.

The British Museum also displays the Rosetta stone, the Parthenon marbles, and has received touring exhibitions including the Staffordshire hoard.

The Tower Of London

Considering that the Bayeux tapestry was almost certainly created in or around Canterbury, it might make sense to display it in the city’s cathedral. The space would certainly be large enough, and the centre of Anglican worship is already a big draw for tourists.

Seeing as the tapestry depicts the events leading up to the Battle Of Hastings, it might make sense to display it somewhere around the town of Hastings. The obvious location is the Hastings Museum And Art Gallery. On the other hand, this one does seem slightly unlikely owing to the small scale of the museum, and the distance and hour and a half by train from London.

The Battle of Hastings took place on Senlac field, some six miles north of Hastings in the aptly-named town of Battle. The battlefield and the Abbey, built by William to atone for the slaughter, are a major tourist attraction. But again, the Abbey might struggle to house an artifact the size of the tapestry.

Other possible (but unlikely) locations

There are a few other UK locations where the tapestry could be displayed. Somewhere around the small town of Berkhamsted, north-west of London could be pleasant seeing as this is where William The Conqueror became, for all intents and purposes, king of England after Archbishop Stigand submitted to him.

In addition, the National Archives in Kew could be a potential location,  as this is where the Domesday book manuscript (William The Conqueror’s other most-famous achievement) is housed. On the other hand, it might be more logical to just move that artifact to the location of the tapestry, rather than the other way around.

Finally, there’s the possibility of a touring exhibition. However, given the stress this would put the tapestry under, it seems unlikely.