No longer satisfied with the post-Thanksgiving day of sales, so-called Black Friday has quickly grown to become a week long event in the shopping calendar.

People are also increasingly choosing to eschew the crowds of brick-and-mortar stores, opting to bag Black Friday bargains online as the lines blur between Black Friday and the following Monday, known as Cyber Monday for its online promotions.

US online retailing giant Amazon — the architect of Black Friday outside of the US — launched its Black Friday offers from midnight of 17 November in the UK, a full 10 days before Black Friday itself (which falls on a different date ever year as it’s traditionally the Friday after Thanksgiving — itself held on the fourth Thursday of November).

Meanwhile, the likes of Currys and Argos also got a jump start on Black Friday this year, beginning their Black Friday deals as early as 20 November.

While this growth isn’t especially impressive, a record number of retailers are also expected to take part in the event this year in an attempt to stimulate waning demand over September and October.

When Black Friday was first exported from the US to the UK the event promised impressive discounts for one day only. However, over time retailers have taken the opportunity to extend the event, both to encourage more consumers to participate but also to relieve operational pressures.

Data from credit card company MBNA suggests the Black Friday spending period is has expanded in recent years, though it’s still Black Friday itself when the real money is spent. 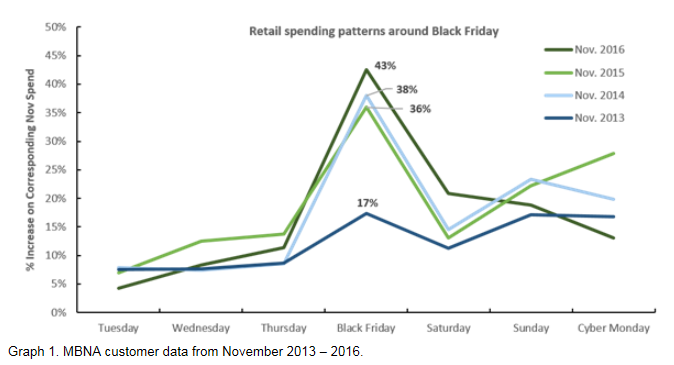 Who will be the biggest winners?

The biggest winners this year are expected to be electronics (which has traditionally been the focus of the event), homeware and clothing retailers, following on from last year’s trends with some popular brands recording a ten-fold increase in sales over the period.

This year DIY retailers and airlines are expected to get involved far more than before, with the likes of budget airline Ryanair promoting substantial discounts on flights.

Electrical sales are expected to continue to dominate Black Friday promotions in 2017, although year-on-year sales growth is forecast to slow around Black Friday to three percent, due to inflation in the market putting people off spending, according to GlobalData numbers.

Homeware sales are forecast to experience the strongest year-on-year growth over the Black Friday period of 5.9 percent.

Black Friday has traditionally been known for long queues, frenzied shoppers, and in store rows, but now shoppers have begun retreating to the warmth and safety of their mobile phones and laptops. 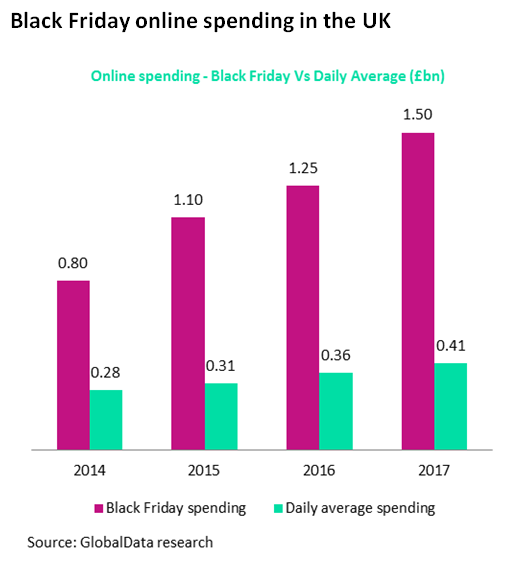 While online spending is growing, shops on the high street will still benefit from a 40 percent uptick in footfall on Black Friday, though unlike online spending, this will quickly return to normal levels over the weekend, MBNA data suggests.

In the US, meanwhile, Black Friday will see some $5bn spent online, a 16 percent jump over the same day last year and $3bn more than on an average day. 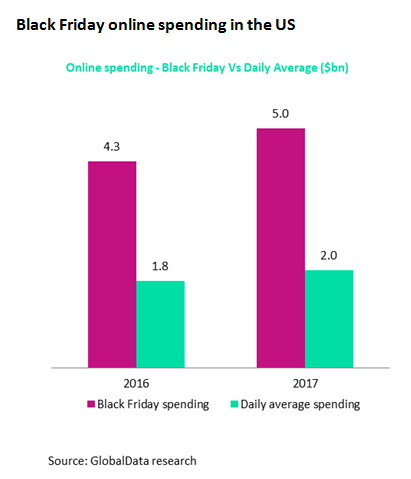