Tomorrow evening the sky will be host to a rare lunar event — the first so-called blue blood supermoon since 1866.

Wednesday night’s moon is the last in a lunar trilogy of super moons, the first of which was seen on 3 December last year. The second – known as a Wolf Moon — fell on 1 January 2018.

A supermoon occurs when the moon is full and at its closest point of approach to the Earth (known as its perigee).

At this time it usually appears around 14 percent larger and 30 percent brighter than a usual moon.

Wednesday will also mark the second full moon within a month, a phenomenon that bears the name blue moon, while its coinciding with a total lunar eclipse is known as a ‘blood moon’.

Hence, on Wednesday night we will see a blue blood supermoon.

The lunar eclipse begins at 11:48am London time when the moon enters the darkest section of the Earth’s shadow, known as the umbra.

Totality begins at 12:52pm London time when the moon will be fully immersed in the umbral shadow.

Some in Australia, North America and Asia may be lucky enough to see it with a coppery hue due to the way light is bent through the Earth’s atmosphere.

Where can you see it?

Nasa executive Gordon Johnston wrote in an official blog post that those on the US west coast as well as those in Hawaii and Alaska will have the best view of the phenomenon, being able to see it in its totality.

You might set your alarm early the morning of Wednesday, Jan. 31 for a lunar trifecta: a pre-dawn “super blue blood moon. 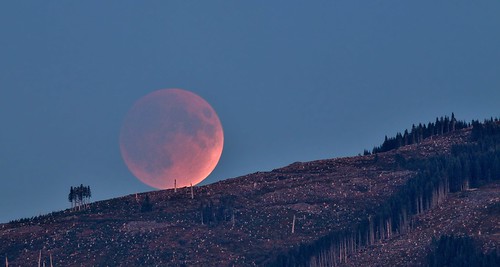 The best time to view the supermoon is between moon rise and sun rise, when the moon sits on the horizon.

This gives rise to an optical illusion known as the moon illusion, when it appears larger when closer to the ground.

For those in Asia, Australia and New Zealand the moon will be best seen during moon rise on 31 January.

Those on the eastern coast of Australia will have the best viewing at 6:26pm local time, while the red of the blood moon will be clearest between 10:51pm and 12:07am.

In India the lunar eclipse will be visible on Wednesday night for an hour and 16 minutes between 6.21pm and 7.37pm local time.

However, the best view of the blue supermoon will be around 2am London time on 1 February.

As with most astronomical phenomenons, the blue blood supermoon is best viewed from a high vantage point, preferably on the outskirts of cities away from light pollution.

If you miss it

Nasa will also be providing a live feed of the blue blood supermoon from 10:30am London time on 31 January — found on Nasa TV and Nasa.gov/live.

There is also an interactive map to track the journey of the eclipse.

For those who miss out on this month’s lunar event, the next lunar eclipse will be later this year on 27 July and will be visible across Asia, Australia, Africa, Europe, and South America.