The price of farmland in England and Wales has dropped by seven percent since its peak in the second half of 2015, thought to be under pressure from the UK’s decision to leave the European Union.

In the last six months of 2017 the price of farmland fell by two percent compared with the same period the year before, according to a survey by the Royal Institution of Chartered Surveyors (Rics) and the Royal Agricultural University.

Brexit has been highlighted by respondents to in every survey since the referendum. Looking ahead at 2018, 32 percent of respondents felt the ongoing Brexit process would result in less land being made available for purchase.

Price expectations are also downbeat with more respondents expecting to see land prices fall in the twelve months ahead than previously. 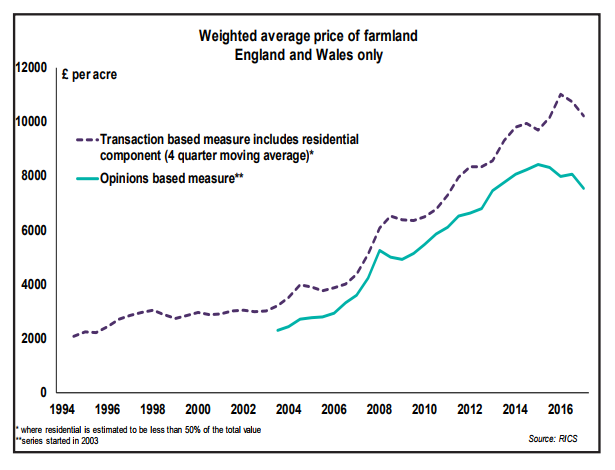 The latest data continues to show the need for clarity from government for the rural community. We have seen demand, prices and rents fall since the EU referendum and now our latest survey results point to less availability of land for would-be buyers.

Rics has continuously called for government to support agriculture and horticulture and when 60 percent of the sales market is driven by farmers it is clear that Government need to provide yet more clarity and certainty.

However, we cannot deny that the nature of rural land-based businesses continues to evolve. With the inevitable restructuring of UK agriculture ahead, there will be a need to support all rural business activities beyond primary agricultural production. 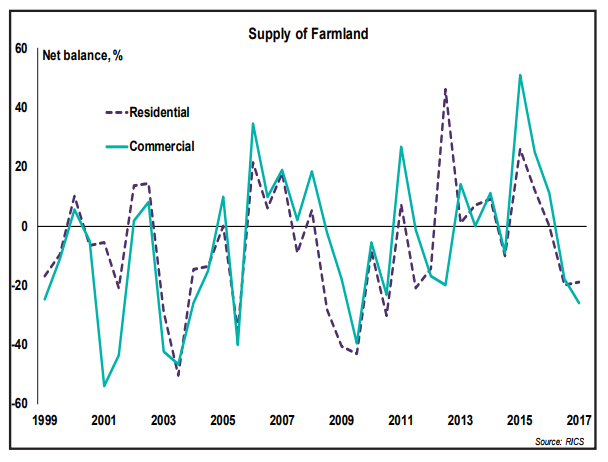 It was the most expensive in the West Midlands where the average price for farmland per acre was £8,500, followed by the South East at £8,253 per acre.

While some farmland values continue to be affected by short-term uncertainty we believe the downturn in values initially triggered by weakness in commodity prices during 2014 is slowing.

Currently, there is a huge range in values across all land types and geographies with some commercial areas and lesser-quality properties seeing greater falls than others. In certain circumstances excellent sale results are, and will continue to be achieved which is particularly the case for farms and estates with significant amenity appeal which are proving to be increasingly popular.