Optimism among UK chief financial officers (CFO) is at an 18 month high after the Brexit vote, a new survey by Deloitte has found.

The global accounting firm’s latest CFO study analysed the opinions of 130 CFOs from FTSE350 and other large private companies, on the risks and opportunities of Britain leaving the European Union (EU).

According to the survey, 31 percent of CFOs said they were more optimistic about the prospects for the UK than they were three months ago.

This is the highest level since the second quarter in 2015 when 35 percent said they were feeling optimistic. 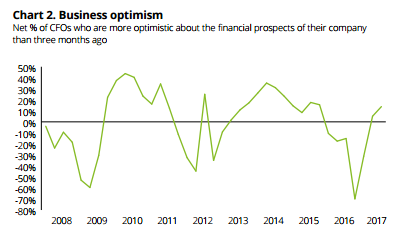 As well, businesses are looking to carry out expansionary measures such as introducing new products and services and increasing capital expenditure.

Cost reduction is still seen as the main goal for many of those surveyed, with 42 percent saying it was a priority, however, 41 percent said they wanted to expand into new products, up from 36 percent in the last survey. 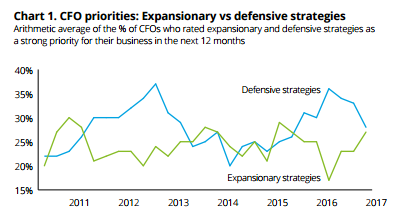 Brexit is still considered to be top of the risk list for many officers yet it has had a lower reading than surveys taken in previous quarters.

The Verdict Brexit tracker, which measures business sentiment surrounding the UK’s withdrawal from the EU is currently holding steady at 73.9, up from a low of 53 after the referendum vote in June last year.

Other risks measured included the possibility of a renewed euro crisis, at 40 percent, compared to 52 percent, and concerns over the US moving to a more protectionist policy, up four points to 47 percent compared to 43 percent previously.

The Brexit shock that hit corporate spirits last June has eased. Optimism among CFOs has hit an 18-month high and uncertainty has fallen from a post-referendum record high to levels last seen in early 2016.

“Brexit still tops the risk list, although at a lower reading than the last two quarters. CFOs believe the Brexit headwinds have eased and see far less damage to their spending plans than earlier expected. While most still see Brexit having an adverse effect on the business environment, even here the degree of negativity has fallen.”

The survey was completed on 22 March, just a week before Theresa May officially triggered Article 50 and began the two-year process of withdrawing the UK from the EU.

Though optimism is up, there is still concerns about how the withdrawal process will affect businesses, with 34 percent of those surveyed reporting high or very high levels of uncertainty facing their business, down from 50 percent in the last survey.

Only 19 percent of CFOs believe that Brexit will good for their business, however, this is up from 14 percent in the last quarter which demonstrates that optimism is growing.

Businesses will hope that the UK can secure the best possible deal on trade and market access, but must continue to plan for an exit in 2019, several years of trade negotiations, and a transitional phase to bridge the two. For many businesses, including our own, access to skills is one of the most pressing issues they face.

“I believe mobility of people should be as high a priority as trade in the future negotiations. If we are to maintain the UK’s status as an open and thriving economy we must retain the diversity of skills that has helped our nation flourish.”