This year has been defined by the one which came before it. 2016 will go down as the year of US president Donald Trump’s election and the UK’s vote to leave the European Union.

However, 2017 is when the upsets and surprises of 2016 began to have more measurable impact on the world. British prime minister Theresa May triggered article 50, putting the UK on the road out of the EU and Donald Trump was sworn in as US president.

Meanwhile, bitcoin soared in price — taking all but the most die-hard cryptocurrency fanatics by surprise. The wave of populism that many feared would roll over Europe seemed to recede, though the threat will remain in years to come.

Cyber attacks, ransomware, and data breaches have become so common they are expected and companies and governments live in fear of hacks. North Korea, already feared for its missile launches, has become a cyber threat as well — targeting national infrastructure and business.

Verdict has collected some of the most eye-catching charts from 2017 that help to illustrate the year we’ve had.

Trump is proud of how the country’s stock market has performed like no other US president.

He regularly says, often via Twitter, that the increase in equity prices since his election in November 2016 validates his business-friendly policies and overall stewardship of the economy.

Trump has claimed his administration’s policies, most notably tax reform, have been the driving force of the market rally.

However, he fails to mention that many of the rest of the world’s bourses outperformed US markets. 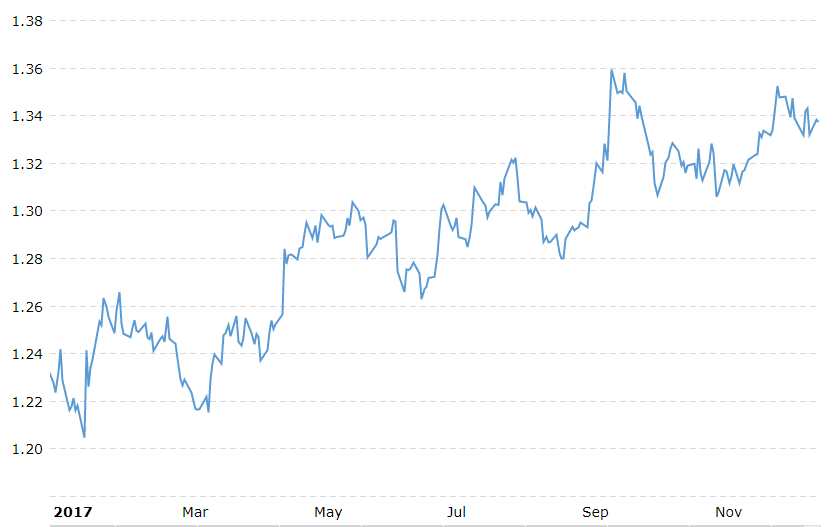 Since the UK’s vote to quit the European Union in June 2016, the pound has been in a hole. This year however has seen it go some way to climbing out of that hole.

The pound is up against the the dollar by eight percent in 2017 — one of the few signs that British prime minister Theresa May is doing a good job steering the country out of the EU.

While markets are happier than than they were with Brexit at the beginning of the year, May still has many hurdles to over come before she can declare Brexit a success.

The low oil price — which isn’t as low as it got in early 2015 — is still stuck in it’s mid-2014 slump, with the oil market battling to control the supply and demand balance that has torn apart the once all powerful Opec oil cartel.

The rise of shale oil and the Saudi Arabia dominated Opec unable to curb its production has motivated the Middle East, lead once again by Saudi Arabia to look beyond oil and consider how it will make money in a world that doesn’t want to buy its oil.

Saudi Arabia published its  so-called Saudi Vision 2030 and has plans to build a city — dubbed Davos in the desert when plans were unveiled last month — built on twin ideals of technological and ecological innovation, a global mega-hub and a catalyst for the country’s move to a post-oil era.

The price of bitcoin — the original cryptocurrency first use of blockchain technology — and its meteoric rise will be one of the things 2017 will be remembered for.

Whether bitcoin turns out to be the end of the financial system as we know it or just another gold rush will not be able to erase the millions of hours people have spent reading, writing and investing in bitcoin this year. Nor the endless bitcoin memes. 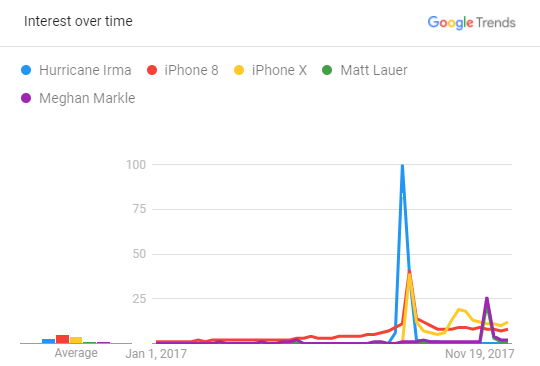 Popular Google searches over the course of each year reveal exactly what has piqued people’s interest and captured the world’s attention. This year, while Hurricane Irma took the top stop, Apple’s second and third position with it’s two new iPhone models will be good news for the company’s investors.