With devices like Amazon Echo, Google Home, and Apple HomePod bringing virtual assistants into the mainstream, it was only a matter of time before someone created a version designed for use in cars.

That someone is German Autolabs, and that version is Chris.

In essence, Chris is a voice-controlled satellite navigation system. Users can also make and receive calls and messages via Chris. The device will also play music. In addition to voice control, Chris also comes with gesture control in some cases, allowing users to flick their hand to switch songs, for example.

While voice control technology is being adopted in some newer cars, the idea behind Chris is that it can be installed in any car. Just like most GPS devices, Chris sticks to the car’s windscreen and is ready to use from there. It has its own speakers or can connect to the car’s speakers via Bluetooth.

A representative of German Autolabs spoke to Verdict about the idea behind Chris:

The core idea of Chris is to democratise access to this new assistance technology in order to fight distracted driving now.

This is why we decided to focus on an aftermarket product and create a really great user experience before integration into cars or with other voice controls in cars.

For the first time in a decade the number of fatal accidents on American highways is on the rise. Experts call it “the Snapchat effect”. We see similar patterns in Europe too and governments are tightening laws to little or no effect.

Technology is ready to solve this problem, with a convenient and 100% touch-free experience based on three cornerstones: natural language understanding, a glanceable user interface and intuitive gestures.

A quiet revolution for driving

As it stands, Chris doesn’t exactly scream ‘revolutionary’. There are certainly plenty of other devices which do what Chris does already.

Most smartphones contain voice assistants which can read and compose messages and control music. In addition, the vast majority of those phones have access to GPS through Google or Apple Maps.

Still, what Chris does successfully is tie all these features together into one device designed for use behind the wheel. Sure, most smartphones have a ‘driving mode’ but putting the phone in a dock, setting up the hands-free mode, and opening a maps app is much more trouble than most drivers will want to put up with. That’s especially if they’re running late anyway.

The other helpful aspect of Chris is that unlike smartphones, it will continue working even when a user loses internet connection; obviously, a helpful feature when driving.

Even so, Chris’ solutions aren’t perfect. The device is essentially driven through its Bluetooth connection to a mobile device inside the car. For users with limited data, Chris may not be as useful as a standard GPS. 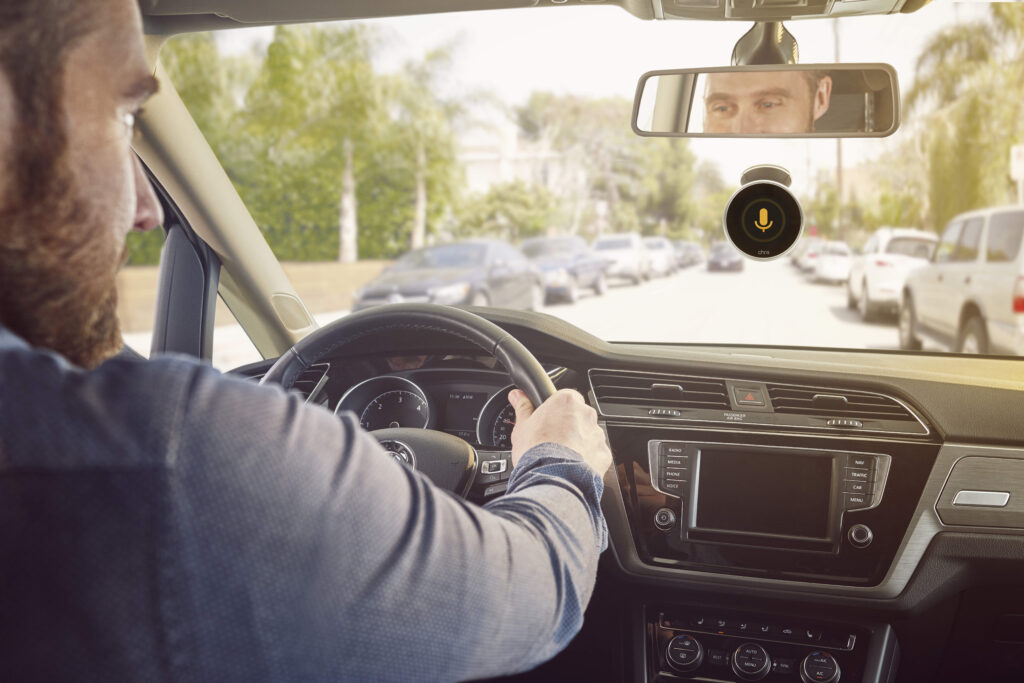 The ‘Alexa’ of the roads

Like other voice assistants, Chris takes an ‘always listening’ approach. This allows the device to respond instantly to all the user’s requests.

German Autolabs’ speech recognition technology is proprietary and based around three basic principles, the company spokesperson explains to Verdict:

Speech recognition software has been around for decades, but with the rise of cloud-based AI and deep learning has made incredible improvements in recent years with recognition rates similar to human recognition. Recognising speech and generating text which algorithms are able to process (and the other way round) is something we simply consider solved – and thus partnered with key players in the fields of ASR (automated speech recognition) and TTS (text To speech).

As part of its dialogue management, Chris has been designed with three basic components in mind. These are natural language understanding, dialogue modeling, and natural language generation. The first allows users to talk to Chris like they would a real person, without formal commands. The second allows Chris to understand a users’ intent and create a flowing conversation. And finally, the last of the three ensures the device is capable of delivering feedback in an understandable manner.

The recognition rates in general are on human level, but what really matters is domain-specific knowledge. What do real people driving real cars in real conditions really say when operating their apps and services? This is what we already started to dive into with our internal and external tests including 1,500 Kickstarter backers that will receive Chris before everyone else. When Chris hits Amazon, we believe it will offer the most accurate voice recognition for any in-car use.

Of course, Alexa, Siri, and their like are handy tools on their own, but what really makes them useful is their app integrations. For example, one of the Amazon Echo’s major selling points is that it can instantly order products from Amazon.

Chris also has some app integrations. WhatsApp and Facebook Messenger are integrated into Chris for messaging, while iTunes and Google Music are available for music. As you’d expect, the standard options for both are also available so Chris will be able to read SMS messages and play any music stored on the phone itself.

While that may not be even closely comparable to the major voice assistants, German Autolabs promises more integrations are coming. Chris is designed to be open plan. Basically, any app which wants to integrate into the service will be able to do so.

Chris is scheduled to launch on Amazon in early September 2018. It will cost approximately $225.