As regional governments become increasingly aware of the social and economic threat posed by climate change, population growth and resource over-consumption, there is growing appreciation that improved energy efficiency, reduced use of non-renewable resources and environmental sustainability can only be achieved by successfully developing and harnessing new environmental technology – clean technology, or ‘cleantech’.

As in other industries, it is likely that many of the disruptive cleantech solutions needed to address these challenges will come from new, startup companies and from other small and medium-sized enterprises (SMEs).

The United Arab Emirates (UAE) is already setting the pace for cleantech development in the Middle East and North Africa (Mena) region.

Abu Dhabi has set ambitious renewable energy and emissions targets and wants to generate 44 per cent of electricity from renewable sources and 6 per cent from nuclear power. It also wants to cut 30 per cent of its carbon emissions by 2030.

“The UAE is the most attractive ecosystem in the Mena region for startups,” says Steven Griffiths, senior vice-president of research and development and professor of practice at Khalifa University of Science and Technology.

Broadly speaking, the Mena region is incentivising local talent in the realm of environmentally sustainable startups.

“We [in the Mena region] are seeing a lot of startups and SMEs developing really interesting cleantech solutions across the renewables, waste and marine space,” says Dana Liparts, co-founder and director at Ecocoast, a sustainable marine technology developer.

The interest in cleantech specifically has been evident since as early as 2012, when Dubai-based peer-to-peer lending platform Beehive funded Enerwhere, a solar energy SME.

In early 2019, New York-based Modus Capital launched a $75m Mena fund for startups through which it hopes to fund more cleantech companies, which founder Kareem Elsirafy says could include “opportunities such as renewable and sustainable technology that mitigates negative environmental impact”.

Still, investment and support for these are low compared to other types of technology startups.

In5 is a startup incubator that has supported more than 160 startups since it was founded in 2013. Data from the company website shows that only one business in each of the energy, sustainable agriculture and waste management fields received funding from the In5 technology centre. 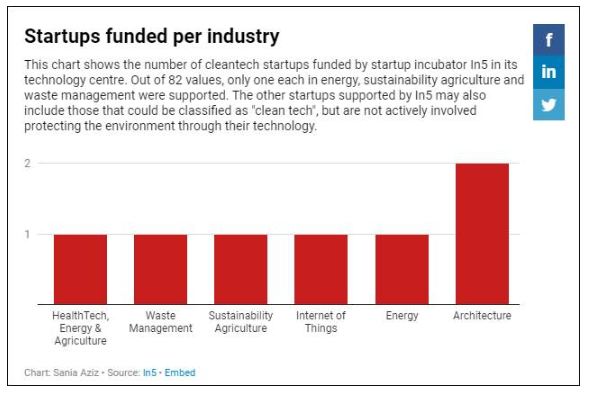 Lack of adequate funding and investment is a major issue, says Rishi Kohli, co-founder of Waterwise, a Dubai startup turned SME that has developed an eco-friendly car cleaning service that uses a biodegradable cleaning spray in place of water.

Khalifa University of Science and Technology’s Griffiths also highlights several financial challenges faced by startups and SMEs: “Early-stage investors in cleantech face challenges in bringing ‘deep tech’ to the scale-up. Software is not so hard, but capital-intensive technology development is yet to have a good supporting ecosystem.”

He says he is impressed with certain industry-led cleantech investment initiatives, such as those of Saudi Aramco, but adds that “we do not have a lot of examples in the region”.

CEO of Catalyst, Çinar Kurra, adds that there are not many dedicated research and development (R&D) centres. Most research continues to happen at universities and government-funded entities, he says. 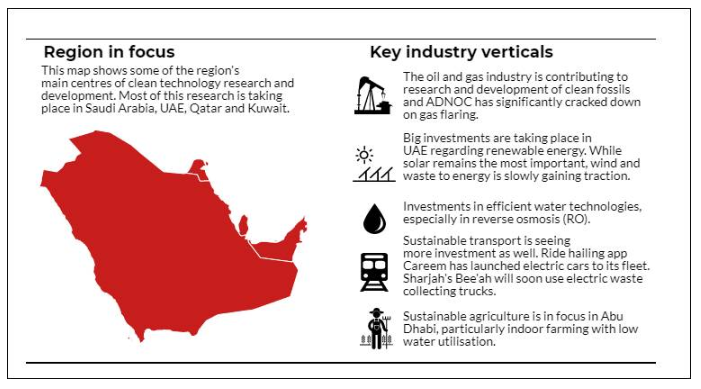 Market conditions can also prove difficult. Waterwise’s Kohli says that about 180 litres of water are used on each vehicle at UAE car wash facilities, despite the fact the UN classifies the country as one of the world’s most water-scarce nations.

Even so, Kohli has faced many difficulties when it comes to selling his product. “Our initial plan was to redistribute our product to other car-washing companies, but that did not get much buy-in, so we decided to set up our own car-washing business.”

When asked why this might be, Kohli notes that the “adoption of cleantech products and services has been generally slow”, and points to the largely price-driven priorities of many consumers, which can prejudice them against alternative, eco-friendly products and services that typically carry higher costs.

In the UAE, a compounding factor, “especially on a large commercial scale”, is what he calls “green fatigue”.

“Consumers have failed to see the tangible benefits for eco-friendly products and services,” he says.

Besides, says Liparts, “we’re also seeing that a lot of the technologies are struggling to offer a real commercial advantage to the end-user over more traditional technologies. Cleantech startups and SMEs that can show a commercial value proposition to their technologies will face far fewer challenges when it comes to funding than those companies that are more costly than traditional.”

This raises questions about consumer awareness and engagement when it comes to environmental issues.

Indeed, the high failure rate of new products and services – especially those that call for behavioural changes on the part of individual consumers – is a common problem for new enterprises. Catalyst’s CEO, Kurra, says that currently, “only 2 per cent of all startups make a profit in the region”.

A different approach could nevertheless significantly improve the uptake of cleantech.

At Catalyst, where a venture capital would look merely at growth potential, the firm provides not only funding but also access to R&D facilities at the Masdar Institute.

It also highlights the need for financial transparency, both as a precondition of funding and as a route to providing more appropriate guidance to startups.

“As a startup accelerator, we would require more transparency in how cleantech startups are running their business,” says Catalyst’s Kurra.

Griffiths also explains, “Perhaps the best way cleantech startups can earn profits today is by building software, power electronics and other small services, and then selling them to large corporations.”

Meanwhile, Waterwise’s Kohli advises that startups and SMEs should start with a limited number of products or services that have a “low cash burn-out” and quicker return on investment (ROI), then attract funding with the aim of scaling up.

By way of example, he explains that investment in agriculture and food-based cleantech has increased as the cost of producing such products has made ROI for the end-users and investors more attractive.

“Lately, more cleantech businesses attract smaller investments from angel investors that allow them to grow with profitable margins, which in turn can then lead to venture capital funding,” Kohli says.

Yet a great deal of activity in the sector continues to be government or public-sector led, leaving significant room for more initiative to be taken by private companies and individuals – and especially by local entities – to support innovative cleantech opportunities.

The author of this report, Sania Aziz Rahman, is a graduate of MA Data Journalism from the UK’s Birmingham City University, with a special interest in reporting stories through data. Twitter: @saniaazizr

This article is sourced from Verdict Technology sister publication www.meed.com, a leading source of high-value business intelligence and economic analysis about the Middle East and North Africa. To access more MEED content register for the 30-day Free Guest User Programme.