In the last few days before the UK general election, the Conservatives have launched a string of highly targeted Facebook ads focused on key constituencies, with former Labour leader Ed Miliband’s Doncaster North constituency among the key targets.

While voters in the majority of targeted constituencies are being shown one of a number of generic pro-Conservative adverts that have been tailored to mention the name of the specific constituency, Facebook users in Doncaster North are being treated to a far more specific advert only being shown in the area.

The advert in question is clearly designed to highlight the division between voters in the constituency, who largely voted Leave in the Brexit referendum, and current MP Miliband’s pro-Remain stance.

It features a picture of Miliband carrying a box full of folders, apparently having been fired, with the text “Ed Miliband voted against Brexit at least 40 times. Send him packing”.  Four versions of the advert are currently live, having begun on 7 December, bearing captions that tell people to vote for the Conservative Doncaster North candidate Katrina Sale. 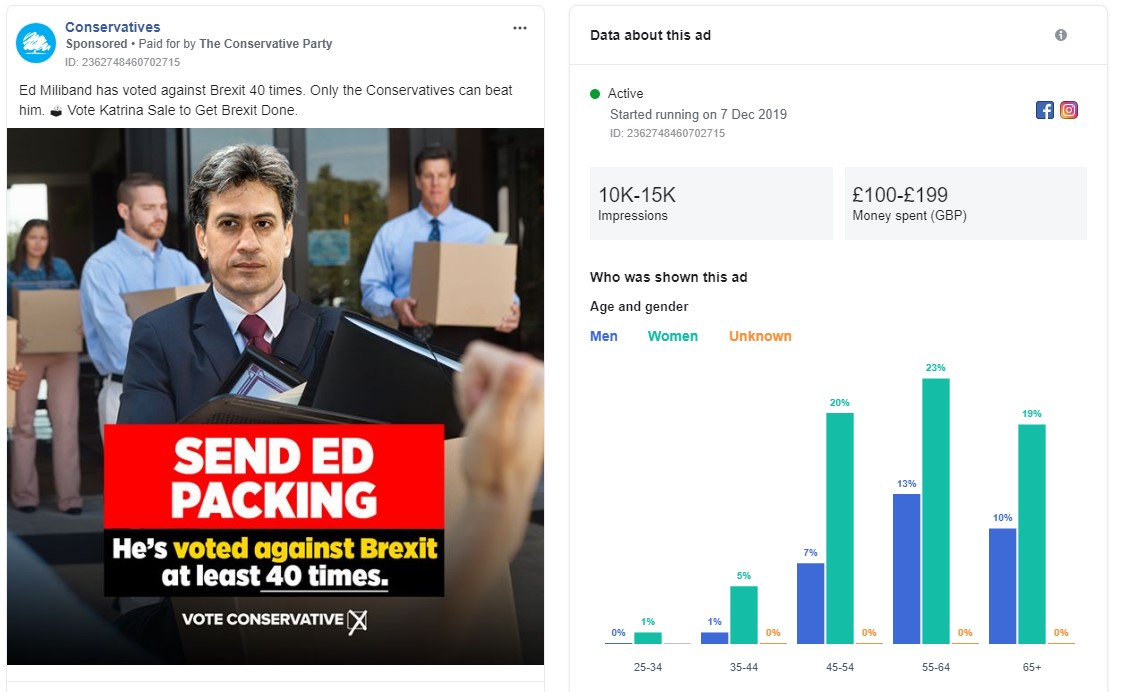 One of the Facebook ads being run by the Conservatives targeting Doncaster North, alongside key impression metrics.

Notably, the advert has far more impressions than other Conservative ads targeting specific constituencies, suggesting that the Tories are viewing Doncaster North as something of the jewel in the crown of their plan to lure traditional Labour voters in pro-Leave areas.

While most constituency specific ads have attracted less than 100 impressions, the four focused on Doncaster North have impressions in the thousands, with the least viewed totalling between 2-3,000 and the most 10-15,000. In total, the four adverts have been seen between 23-31,000 times.

While Facebook does not provide exact targeting data, the adverts do appear to have been targeted to older female voters, who make up the bulk of the data. On the version with the most impressions, 42% of views came from women over 55, while 23% came from men over 55. Just 1% of views came from people under 35.

Doncaster North, which first became a constituency in 1983, has been a Labour seat for the entirety of its existence, meaning a Conservative win would be a key headline of this election.