Security robot maker Knightscope has rolled out a “Covid-19 Public Safety Announcement” upgrade to its fleet of autonomous ‘robocops’.

The upgrade will allow law enforcement agencies deploying the dome-shaped robots to broadcast messages such as “social distancing is in practice and required here” and “please disinfect your hands with an alcohol-based sanitiser and avoid touching your face”.

Coronavirus announcements are made autonomously when the robot detects a person, at random intervals or manually by a member of law enforcement.

Knightscope’s robocops – which use sensors including 360-degree cameras, lidar and microphones to navigate – have been operating on streets, around malls and inside casinos since 2015.

In 2017 it’s K5 model made headlines after driving itself into a watery grave in a Washington pond.

According to a Knightscope press release, the Covid-19 Public Safety Announcement feature has been deployed across “numerous” robocops in its fleet. Verdict asked Knightscope how many law enforcement agencies are currently using the Covid-19 awareness feature and in which locations, but did not get a reply at the time of publication.

The Covid-19 announcement feature can be rolled out over-the-air and is compatible with its K1 Stationary, K3 Indoor, or K5 Outdoor Autonomous Security Robots.

The upgrade, which will see the Dalek-shaped robot bark out announcements such as “washing our hands is fun! Oh, wait…. I don’t have any hands”, is being offered free to Knightscope clients.

“We are pleased to announce that our Covid-19 Public Safety Broadcast Announcements feature is now live and deployed in production,” said William Santana Li, chairman and CEO at Knightscope.

“We offered this as a free upgrade to all Knightscope clients as part of our Machine-as-a-Service (MaaS) subscription offering. The majority of our clients were excited to activate the feature, with many even asking for their own custom messages tailored to their respective facilities.”

The 135kg robots have not been without controversy since former police officer Stacy Stephens formed Knightscope in 2013.

In 2016 a Knightscope K5 robot deployed at the Stanford Shopping Center in Palo Alto, California, collided with a 16-month-old toddler and bruised the child’s leg.

While its design means it is unable to make arrests or prevent crimes, its surveillance abilities see it used as a deterrent and to provide assistance to law enforcement. 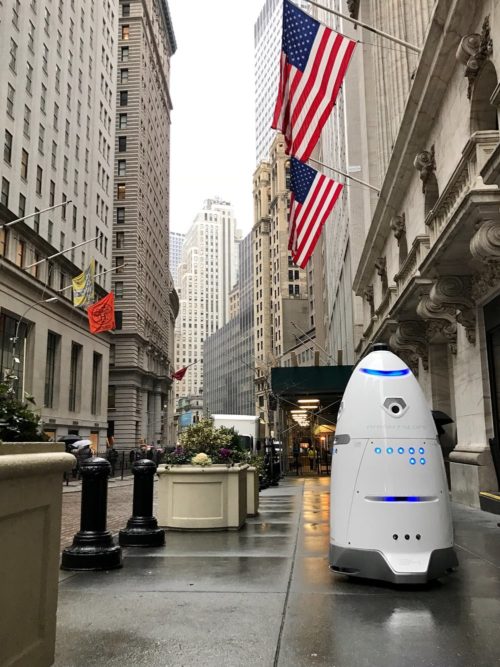 The coronavirus public announcement is already being deployed, according to Knightscope.

Knightscope’s robocop is not the first example of robots being deployed to assist law enforcement during the coronavirus pandemic.

In Tunisia, a robot known as PGuard controlled by police asked citizens for ID and asked why they were out on the streets.