US president Donald Trump issued a threat on Wednesday to cut off US aid to any country that votes for a resolution at the United Nations (UN) condemning his decision to recognise Jerusalem as the capital of Israel.

US ambassador to the UN Nikki Haley tweeted on Wednesday warning that Trump had asked her to report on “who voted against us”.

At the UN we're always asked to do more & give more. So, when we make a decision, at the will of the American ppl, abt where to locate OUR embassy, we don't expect those we've helped to target us. On Thurs there'll be a vote criticizing our choice. The US will be taking names. pic.twitter.com/ZsusB8Hqt4

Of the 15 members of the UN Security Council (UNSC), 14 voted in favor of the Egyptian-drafted resolution opposing the recognition of Jerusalem as Israel’s capital.

How much foreign aid does the US give?

The US is the largest single donor country of foreign aid in the world, according to figures from 2015.

It outspends the next largest aid provider — the UK — by more than $10bn a year.

In a Kaiser Family Foundation study published in early 2015, more than half the respondents said they felt that the US was spending too much on foreign aid.

Long-term development aid provides ongoing funding for projects to promote broad-based economic growth and general prosperity in the world’s poorest countries. More than half of it goes to bilateral global health programs, including the treatment of HIV/AIDS.

Humanitarian aid is spent to alleviate short-term humanitarian crises, such as those resulting from famine, earthquakes, war, failed states, or other natural or man-made disasters.

The US provides roughly $8bn a year for UN operations, about $2.5bn of which goes towards peacekeeping.

What countries receive aid from the US?

In terms of regions, the Middle East and North Africa receive the most economic assistance.

The Sub-Saharan Africa region receives $1.2bn — 25 percent of the budget, while the Middle East receive 31 percent and South and Central Asia receive 25 percent of it. 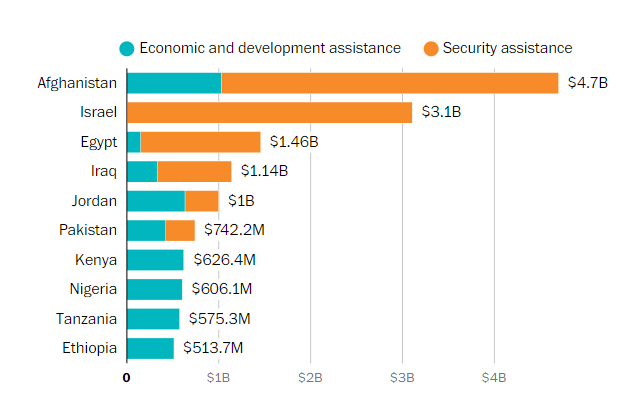 Egypt, which drafted the resolution to veto Trump’s decision on Jerusalem, receives an average of $1.6bn in aid from the US each year.

Afghanistan receives $3.7bn in security aid, all of Israel’s $3.1bn is military aid, and the vast majority of aid to both Egypt and Iraq is security-related, according to the Council on Foreign Relations (CFR), a Washington-based think tank.

There are only six countries that are not full members of the UN — Taiwan, Western Sahara, Kosovo, South Ossetia, Abkhazia and Northern Cyprus.

None of them are big beneficiaries of US aid.