GlobalData has been tracking data on deployments of Internet of Things (IoT) technology by enterprise organizations for several years, via its IoT Deployment Database. While collecting available data on deployment projects undertaken in 2019 will continue throughout 2020 as more information becomes available, the data collected so far provides useful insights on where activity is occurring regionally, by sector, and for each common use case. Below are highlights—including how enterprise IoT market activity in 2019 looked compared to the previous three years.

More “global” deployments than ever

Europe still accounts for the most IoT deployment activity for which GlobalData data is available, edging out North America in 2019 at 32% compared to 28% of all deployments. (In the period of 2016-2018, the figures were 38% and 30%.) Projects identified in Asia-Pacific, the Middle East and Africa (MEA), and Central & Latin America (CALA) continue to appear under-represented in our database compared to what is likely occurring on the ground. 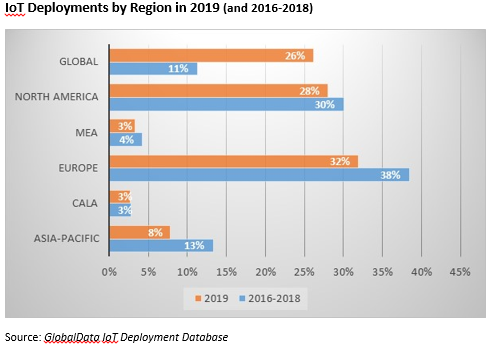 Comparing IoT deployments by sector in 2019 is instructive, and reflects the high volume of industry messaging around operational technology and Industry 4.0 over the last 18 months or more. Last year, manufacturing overtook government as the sector accounting for the largest number of IoT deployment projects, with 23% of the total (compared to 15% in 2016-2018). 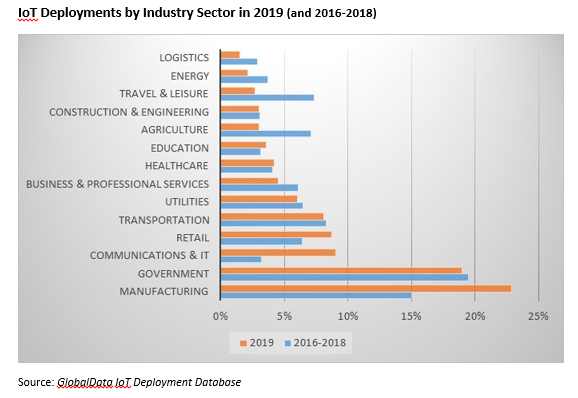 Advanced automation use cases on the rise

Despite the manufacturing sector deploying IoT more frequently in 2019 than other sectors, true Industry 4.0 case studies are still difficult to find. That said, the trend in IoT use cases in 2019 does provide evidence of the technology being used for more advanced applications within industrial and enterprise environments. For example, during 2016-2018, condition monitoring was the most frequently adopted IoT use case, followed by smart city. Both use cases include deployments that collect data on the static condition of a connected object: on or off, hot or cold, connected or disconnected. While these solutions provide useful insights, they are limited compared to deployments that monitor objects in motion (Asset Tracking and Telematics), or that combine automation with analytics drawn from sensors monitoring to drive efficient new processes. 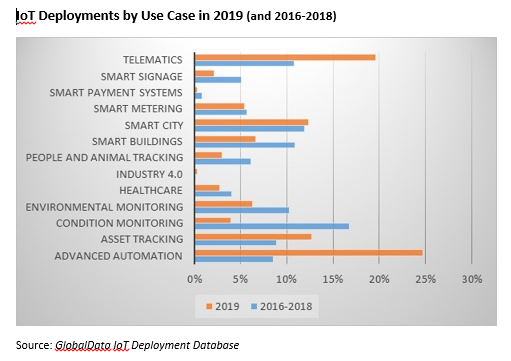 Asset tracking accounted for 13% of deployments in 2019. This was up from 9% during the preceding three year period. Telematics, similarly, increased to 20% from 11%. Most notable is the recent prevalence of the advanced automation use case. This accounted for 25% of deployments tracked in 2019, up from 9% in 2016-2018. It includes deployments involving equipment which has been automated or networked to central control to optimise production and maintenance activities.

One of several other data points tracked in GlobalData’s IoT Deployment Database are the intended benefits, or project goals. Cost reduction and increased revenues are project goals that were less prevalent in 2019 compared to the previous three years. In 2019, the most common project goal for IoT deployments was improved operational efficiencies. This figure was79% of all deployments, compared to 66% during the previous perio). Enhanced insight and decision-making is another frequent goal of IoT deployments and was evident in 49% of projects in 2019, compared to 56% in 2016-2018. 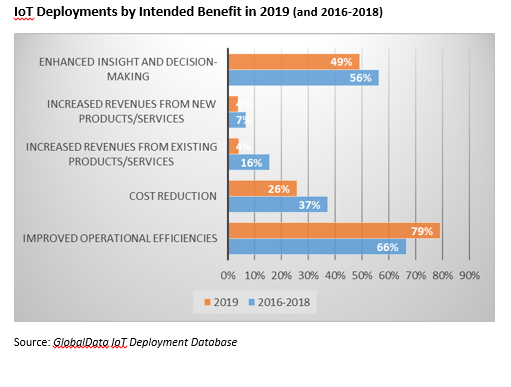 While these trends are fluid (and individual deployments may seek to achieve more than one of these common goals), the even greater focus recently on business efficiency may indicate that operations and processes will retain centre stage in IoT deployment activity in 2020 as digital transformation increases further in maturity across enterprise sectors.