UK phone retailer Dixons Carphone has revealed pre-tax profits fell 60 percent in the six months to the end of October on the same period last year.

Its share price rose however after the company said it has a plan to overhaul how it sells phones and the temporary blip in sales is largely out of its control.

The company put out a profit warning back in August and share prices dropped by nearly a quarter. 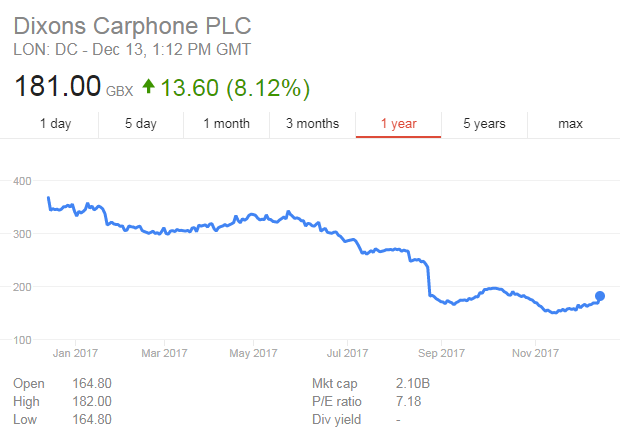 DIxon’s chief exec Seb James cited the UK leaving the European Union as the primary cause for the company’s problems, arguing the fall in the value of sterling since the UK’s Brexit referendum had made mobile phones significantly more expensive people were choosing to break the traditional cycle and hold on to older mobile phones for longer.

Fast-forward three and a half months and the results tell the same story. James once again cited increasing handset costs and slow technology growth.

Fortunately for Dixons Carphone, investors have faith in the plan to shake up phone sales.The news boosted share prices by eight percent in the first three hours of trading, the highest price in nearly two months.

Increasing demand for buy now, pay later phones — where people can pay a small deposit for an expensive device — is putting intense pressure on Dixons Carphone to be able to finance these devices for several months.

James has discussed bringing in a third-party to provide this financing to the company and such a step would greatly improve Dixons Carphone’s outlook and future profitability.

The latest profit announcement is very much a temporary issue.

The company is not a bank and yet has had to act as one for several years, funding the desires of millions of its customers for several months.

And Apple deserves a large part of the blame for Dixons’ most recent poor performance.

The delayed release of the iPhone X pushed a considerable amount of income for Dixons Carphone into the second half and its $1,000 price tag is steep enough to put some off upgrading.

The trading update did, however, include some positive news.

Profits in its Nordic markets were up nearly a quarter, while profits in Greece doubled; the company also reported record Black Friday sales.