The EU is considering a massive budgetary overhaul that will see tens of billions of euros in funding redirected from Central and Eastern Europe to countries still struggling after the financial crisis such as Spain and Greece.

The economic reform plan is currently under discussion in talks for the European Commission’s draft 2021-2027 EU budget, due to be unveiled next month.

As part of the plan, Brussels wants to divert up to €350 billion ($428 billion) in funding from Poland, Hungary, the Czech Republic and other Baltic states to countries worst hit by the financial crisis such as Italy, Spain, Greece, and even some regions of France.

The European Commissioner is still thrashing out the exact details of the reform plans, detailed in a draft policy paper viewed by the Financial Times.

The policy targets less developed parts of the union based on their per capita gross domestic product and aims to support job creation, business competitiveness, economic growth, sustainable development, and improve quality of life.

Under the new criteria for the draft budget, funds will be allocated according to indicators such as youth unemployment, education, the environment, migration, and innovation.

Warsaw and Budapest are expected to be most affected by revamp, which is set to be unveiled by European Commissioner for Budget and Human Resources, Günther Oettinger on 2 May.

With long-term funding at stake, Poland has put forward plans for a judicial overhaul to placate the EU.

The reforms are designed to fill a €12 billion to €13 billion budget gap left by the 2019 exit of Britain, the bloc’s biggest net contributor.

A number of other measures are also on the table to raise funds for the seven-year budget, expected to exceed €1 trillion starting from 2021.

Apart from Brexit, economists are also worried about a slowdown of the Eurozone in 2018, after the 2.5% acceleration in 2017.

According to global market researchers, Euromonitor, GDP growth in the Eurozone is set to rise to 2.4% in 2018 and 2.1% in 2019 in a downward trajectory. 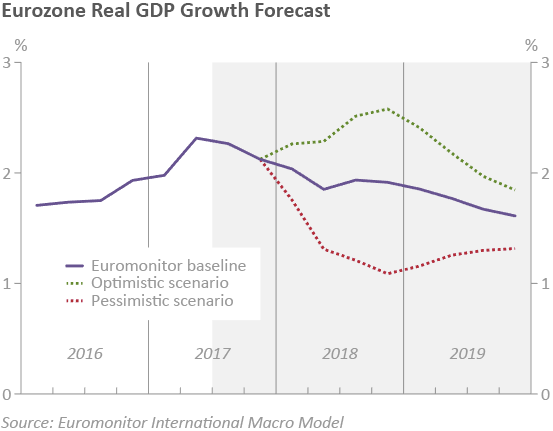