Following another fall in the Facebook share price yesterday, the social media giant has now lost $100 billion from its market capitalisation from its peak on 2 February.

This is more than the total market value of companies like Paypal ($91 billion) and Starbucks ($81 billion), and close to Netflix ($130 billion) and McDonald’s ($125 billion).

Facebook’s market cap peaked at $552 in early February before beginning its $100 billion slide.

The vast majority of that value – around $80 billion – has been lost since 16 March, when the news broke that political consultancy Cambridge Analytica had allegedly harvested the data of 50 million Facebook users.

Yesterday, the Facebook share price fell by another 4.9% after the Federal Trade Commission (FTC) announced that it was investigating Facebook’s privacy practices and chief executive Mark Zuckerberg agreed to testify before Congress about the scandal (he refused, however, to appear before British MPs). 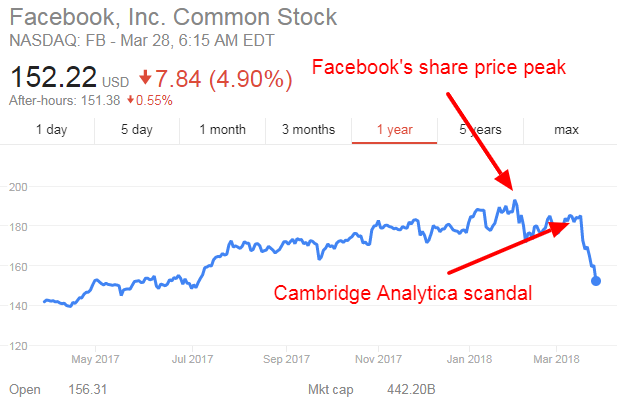 Facebook has had dealings with the FTC before when, in 2011, it reached a settlement and offered privacy assurances. Now the FTC is investigating whether Facebook violated the “consent decree” they have with users by sharing data beyond the limits implied by each individual’s privacy settings.

The penalty for violating the consent decree is $40,000 and the Washington Post reported that, if the data of 50 million people is found to have been compromised, Facebook’s potential fines could run into trillions of dollars.

Zuckerberg’s personal wealth has also taken a hit since 16 March and is said to have decreased by around $14 billion (although he still has about $61 billion in the bank, so he’s probably not too worried).

In the wake of the Cambridge Analytica scandal, Facebook is facing a slew of regulatory and legal issues.

As well as the FTC probe and the testimony before Congress, 37 state attorneys have written to Zuckerberg to demand answers about Facebook’s data protection.

Since last week, eight separate lawsuits have now been filed against the company over data misuse.

The shock waves of the crisis have not only been felt by the Facebook share price. Other large technology stocks have also fallen with investors fearing a backlash.

The New York Stock Exchange so-called Fang index – which includes Facebook as well as other tech stock market darlings Apple, Amazon, Netflix and Google – dropped 5.6% yesterday and is down 6% on last week.

This is the worst showing the index has had since its inception in 2014. Amazon is down by 4%, Netflix 6% and Alphabet (which owns Google) has dropped by 4.5%. Twitter has also recorded a 12% loss.

Despite Facebook’s recent poor performance, stock analysts remain bullish on the company, with FactSet reporting that 90% of the brokers who cover the stock have given it a “buy” rating.

This is still stronger than any other major technology firm except Amazon.