The Facebook share price rallied as the company’s founder and chief executive Mark Zuckerberg give a marathon five-hour performance in front of US law makers, rising almost 5% by the US close and adding $3 billion to Zuckerberg’s personal fortune.

And investors liked what they heard. The 33-year-old billionaire began with an apology:

It was my mistake, and I’m sorry. I started Facebook, I run it, and I’m responsible for what happens here.

It’s clear now that we didn’t do enough to prevent these tools from being used for harm. That goes for fake news, foreign interference in elections, and hate speech, as well as developers and data privacy.

Zuckerberg’s personal wealth is down around $8 billion since the beginning of the year, however.

The Facebook share price has been heavily-hit by the Cambridge Analytic scandal which has wiped some $100 billion dollars from its market value since the beginning of the year.

The vast majority of that value – around $80 billion – has been lost since mid-March, when the news broke that political consultancy Cambridge Analytica had allegedly harvested the data of almost 100 million Facebook users.

But it’s not over yet for Zuckerberg — later today he’ll appear before the US House Energy and Commerce Committee to talk about Facebook’s use and protection of user data. 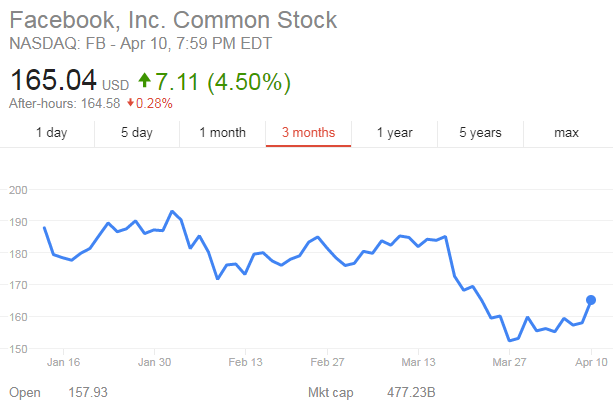 Score keepers on Twitter and on the markets felt Zuckerberg performed well over the grilling, partly because the majority of the US Senators asking him questions did not understand how Facebook — nor the internet in general — worked.

Senator Orrin Hatch asked: “How do you sustain a business model in which users don’t pay for your service?”

It's been a profitable appearance before Congress for Mark Zuckerberg. His fortune has risen $2.7 billion today to $67 billion as Facebook shares rose, according to the Bloomberg Billionaires Index. @tictoc pic.twitter.com/Lw5NZGNlwg

Meanwhile, there has been some suggestion Zuckerberg should step back from the running of Facebook.

Richard Hunter of Interactive Investor told the BBC’s Wake Up To Money:

I think he needs a chief executive. We’ve seen this at some of the fashion houses over the years when you’ve got a creative director that’s done so well that he finds himself in a CEO-type role that he’s plainly not suited to.

If Zuckerberg continues to be the visionary for Facebook then perhaps the day-to-day concerns would be best left with someone else.

I believe it’s important to tell people exactly how the information that they share on Facebook is going to be used.

To your broader point about the privacy policy … long privacy policies are very confusing. And if you make it long and spell out all the detail, then you’re probably going to reduce the percent of people who read it and make it accessible to them.

Cambridge Analytica wasn’t using our services in 2015, as far as we can tell … They weren’t an advertiser. They weren’t running pages. So we actually had nothing to ban.

When we heard back from Cambridge Analytica that they had told us that they weren’t using the data and deleted it, we considered it a closed case. In retrospect, that was clearly a mistake. We shouldn’t have taken their word for it. We’ve updated our policy to make sure we don’t make that mistake again.

My position is not that there should be no regulation.

I think the real question, as the internet becomes more important in people’s lives, is what is the right regulation, not whether there should be or not.

On Russian interference in elections:

One of my greatest regrets in running the company is that we were slow in identifying the Russian information operations in 2016.

We have kicked off an investigation … I imagine we’ll find some things.

We have a lot of competitors … Do you want just one? I am not sure I can give one but can I give a bunch? There are three categories that I would focus on.

One are the other tech platforms: Google, Apple, Amazon, Microsoft, we overlap with them in different ways.