When Marieke Flament was first approached about working for the social payments app Circle, she was intrigued by its tagline as a bitcoin company.

“So I read the brief and actually it was not about bitcoin, it was about the blockchain and how it’s changing and revolutionising the world,” she tells Verdict.

18 months later, Flament has been working for the startup as its European managing director as it expands across the continent from its European headquarters in Dublin and London.

If you’ve never heard of Circle before, it is a peer-to-peer (P2P) payments app.

Launched in October 2013 in the US, it came to the UK in 2016 and aims to encourage people to transfer money through its app instead of through cash or using a banking app.

“We want to make money work the way the internet does, which at its core sounds simple. But it’s very complicated to do that,” says Flament.

In order to make this happen, Circle has been built using blockchain technology and capabilities and prides itself as having one of the largest crypto-trading desks in the world. It did this initially to allow customers to hold bitcoins in its wallet, though it eventually removed this option last December.

Instead of focusing on bitcoin, Circle is now using the blockchain is empowering other projects at the company such as its recent announcement to offer its users cross-border payment transactions with no fees.

“We don’t need to rely on a third-party to do currency exchange we can do that ourselves because we’ve built that capability. What we’re seeing is all assets in a way are moving towards becoming crypto-assets. You can imagine a world where everything is happening on a blockchain capability,” says Flament.

But why P2P payments?

How can a startup get consumers who are used to sending money through a mobile banking app or an established payments company like PayPal to trust an unknown?

Circle’s co-founder Jeremy Allaire has spoken in the past about being inspired by China’s WeChat platform, which is big on social transactions.

In Europe, Flament says it’s the Nordic countries that are more advanced when it comes to P2P transactions helped by its current transition into a cashless society.

Society is changing and rather that needing to even hold a card or cash we’re doing this constant peer-to-peer interaction. The Nordic markets are very advanced … whereas other markets like the UK, France, Spain and Italy, are just at the beginning.

So, Circle is banking on the European countries it has fully launched in, the UK, Ireland and Spain, to turn cashless?

It’s definitely something that is happening. But it’s more than that — it’s a movement of how people interact with each other.

This, Flament explains, is why Circle was built with the social factor intact.

Honestly, the problem that we’re solving is the £3 or £5 your friend owes you, the constant small amounts that bring a lot of friction. We’re building Circle with this request function; you can add a picture or a gif in the message. It’s changing the way money is from a user perspective, away from boring cash. 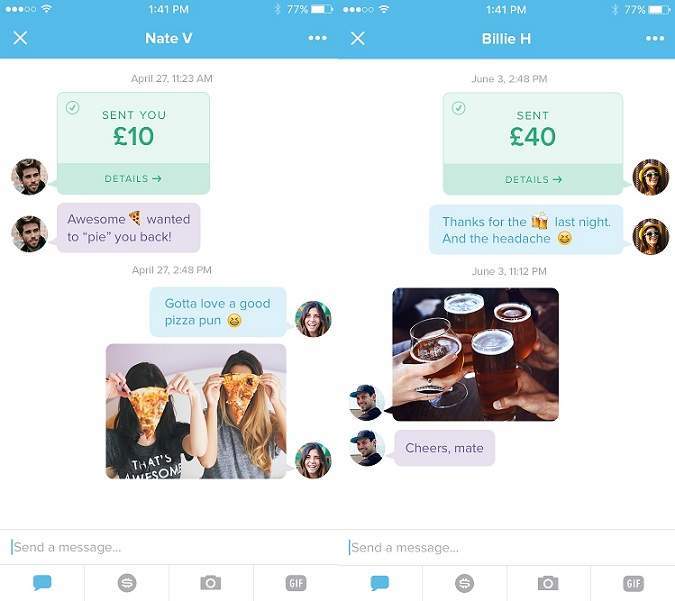 It’s paying off for Circle. Last year it moved $1bn in transactions across Circle wallets around the globe.

However, it isn’t without its competition.

Apple recently announced it was going to facilitate social payments through iMessage at its latest developers’ conference and Facebook Messenger is going to start expanding social payments across its platform.

Flament isn’t fazed about the new players in that space.

It’s great to see big companies and more entrants getting into that space. Now, it’s more how do you make sure that you can be different from what others are doing? That part is extremely difficult to do though is cross-border.

Speaking of borders, it’s hard not to discuss the UK’s exit from the European Union at the moment, particularly when there are concerns over how this will affect London as a financial hub. However, Flament maintains this will endure due to the ecosystem of the capital.

London is a unique place, where the whole banking industry has been at the forefront of fintech. The Financial Conduct Authority (FCA), the Treasury, the banks, the startups: the ecosystem is talking together. That is a very difficult thing to do and you don’t have that in other markets.

Circle still believes there is more to be done in the social payments world. It is currently developing an in-house project, named Spark, which will eventually be an open-source project built on ethereum to enable consumer digital wallets to work together.

According to a blog, Spark:

Provides a smart contract container that enables wallet-to-wallet transactions within and across currencies, including native digital fiat assets (digital dollars, euros and other currencies.

The company wants this to become the ecosystem for free and open consumer payments across the internet, the way email became the ecosystem for exchanging messages. It is reportedly working with “several partners” on the project, including banking institutions and other companies “similar to Circle”.

“Spark won’t change how Circle functions, but it will change the Cloud and interaction that Circle can have with other products,” says Flament.

“Imagine a place where you’re using Circle but you’re sending money to someone who is in another country on another wallet, the same way that that today if you’re on Gmail you can send an email to someone using Yahoo. That’s what Spark will enable.”

Spark sounds almost like a holistic version of the internet, with different companies and people working together, across different borders and in different currencies, facilitated by the blockchain and Ethereum. But Circle thinks it is simply a step in the right direction.

“You can think of it like: bitcoin is the version 0.01 of the internet and Ethereum is only version 0.1,” explains Flament. “It’s still early days for the blockchain, but like when the economists said this is the technology of the 21st Century, it’s definitely going to affect a lot of different industries.”