Online grocery shopping platform Everli has secured $100m in a Series C funding round, but it’s not alone. The food delivery segment of the tech industry is set to serve up a healthy helping of market growth in the next few years.

Having launched in Italy in 2014 as Supermercato24, Everli has since expanded its operations to Poland, the Czech Republic and France.

Similarly to companies like Deliveroo, Uber Eats, DoorDash and Just Eat, Everli uses gig economy workers to deliver its services. However, instead of delivering restaurant-made food, the workers serve as personal shoppers that pick the products ordered from the stores and deliver them to consumers.

“Everli is focused specifically on the grocery space,” Federico Sargenti, CEO at Everli, told TechCrunch. “Rather than small baskets, or picking up just the basic essentials, Everli is focused on delivering whatever you need right up to your full weekly shop, with same-day delivery and a one-hour delivery window of your choice.”

Everli is not alone in enjoying some growth. Last week Berlin-based on-demand grocery delivery startup Gorillas netted €245m in a Series B round that brought its valuation to $1bn. This meant that the firm secured its unicorn-bragging rights just nine months after its launch. Earlier in March, Gorillas’ main German competitor Flink secured $52m in seed funding.

However, this could be just the beginning. Recent thematic research from GlobalData estimated that the food delivery segment of the tech industry will grow at a compound annual growth rate of 8% between 2019 and 2023. That would mean a jump from $201.7bn to $272.8bn within the period. The expected growth is partly fuelled by the impact of Covid-19.

Figures from GlobalData’s Intelligence Centre also point towards an upwards trend in terms of the capital injected into food delivery startups. In 2014, the sector completed 54 venture financing rounds, raising a total of $1.01bn. Last year, those numbers jumped to 116 rounds raising $4.45bn in total.

Unsurprisingly, when looking at the thematic investments in the food delivery segment over the past decade, ecommerce investments have been the key technology backed by investors, followed by digitalisation efforts. Over $2.1bn were invested in the ecommerce initiatives in 2014. By 2020, that figure had spiked to $9.19bn. 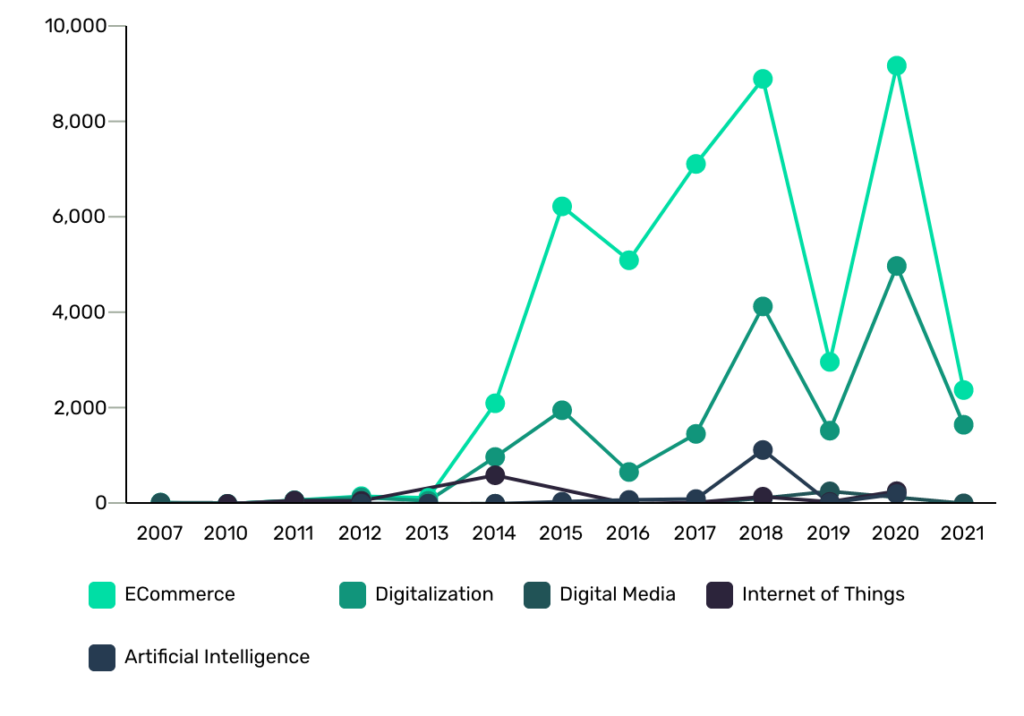 The industry does face several challenges. Key among them is the increased pressure from investors, customers and employees to change the sector’s reliance on gig economy workers.

Tellingly, UK-based Deliveroo is set to float on Wednesday, but two of the country’s biggest investors will refrain from investing the initial public offering (IPO), saying that they aren’t “comfortable that the way in which [Deliveroo’s] workforce is employed is sustainable.” Deliveroo has repeatedly denied giving its riders the status of employees, arguing that they are self-employed contractors.

Aviva Investors and Aberdeen Standard openly denying that they would invest in Deliveroo has been seen as the main cause why the startup has changed the size of its post-IPO valuation. Having originally sought a valuation up to £8.8bn, it is now targeting a valuation between £7.6bn and £7.85bn.

Uber has faced similar challenges over the years. In March it made a U-turn on the UK ride-hailing side of the business, announcing that it would re-categorise drivers as employees rather that self-employed contractors from now on, having argued for years that the people on its taxi app were not employed by the company.

The change in its public stance came after a highly publicised Supreme Court ruling in February that said that drivers at the business should be categorised as employees and enjoy benefits like the minimum wage and paid holidays. Uber Eats drivers were not included in the recategorisation.