US president Donald Trump’s $1.5tn tax cut plan has been a Christmas gift to global stock markets and looks like it will carry through to 2018 — and that could make the 2017 so-called Santa rally one of the biggest on record.

Trump’s promise of fewer regulations and a cut of the corporate tax rate from 35 percent to 21 percent has boosted the health of corporations, feeding into positive investor sentiment in Europe and Asia. It means corporations will have theoretically greater earnings without needing higher revenues and sales.

Trump has through out the year adopted the success of Wall Street as a mirror for his own administration, hailing the bull run as a personal endorsement.

Overall, Trump’s not wrong — 2017 has been a good year for shares, with most stock markets posting double-digit gains. 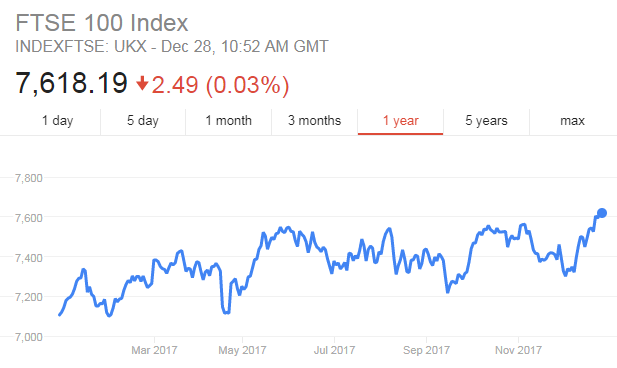 The performance of the UK blue-chip index this year reflects global conditions, rather than the health of the UK economy which remains bogged down in Brexit uncertainty.

The Dow Jones industrial average is up 25 percent this year, ending Wednesday trading nearly 5,000 points higher than its close on the eve of Trump’s inauguration. The S&P 500 surged by 20 percent and the tech-heavy Nasdaq index outshone them with all with a stunning 29 percent gain. 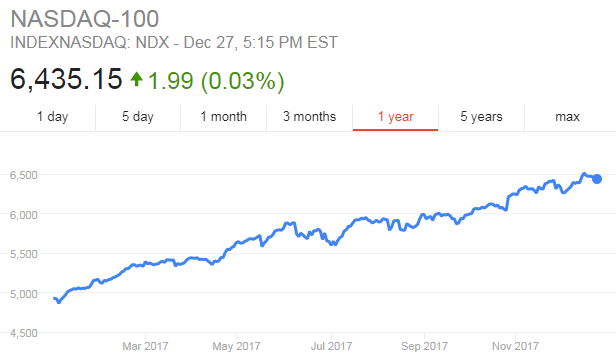 However, the dollar dropped against most major currencies today and is heading for its worst year in more than a decade.

Many investors and market watchers think the big moves for the year are pretty much done with.

With only two trading sessions remaining for 2017, liquidity dried up across the global markets. This has been obvious in US and European equities, where volumes dropped significantly. However, some investors continued to tweak their portfolios slightly, leading to insignificant price action. I don’t expect equities to deviate much throughout Thursday and Friday.

And while markets in the UK and the US have been on a first-class ride into record territory in 2017, they weren’t alone.

The value of public companies on global stock markets grew by $12.4trn in 2017, according to S&P Dow Jones Indices, which included dividends in its calculation.

In Argentina, while inflation is above 20 percent and the currency continues to weaken, the Merval index surged 73 percent this year and hit a record high the day after Christmas.

Meanwhile, Hong Kong’s Hang Seng has charged ahead by nearly 35 percent this year while China’s major mainland indexes in Shanghai and Shenzhen floundered.

In Nigeria, the country’s All-Share index is still far below its 2008 record but has narrowed the gap with a 43 percent rally in 2017.