Since arriving in their country in early 17th Century, gin has been a staple drink of the British. Gin has seen off threats from morality protesters to fellow spirits.

Right now, it seems like gin is on top of the world. New figures from the Wine And Spirits Trade Association found 51 million bottles of gin were sold in the UK in 2017, 27% more than in 2016.

Gin is big business; now a £1.9 billion industry in the UK alone.

And from the UK, the trend for gin has grown to take over the world.

In a recent documentary, Verdict spoke to gin experts representing drinks from all over the world. Portobello Road Gin one of the UK’s largest independent gin distillers.

Four Pillars gin has begun to give an Australian twist on the classic spirit. Mr Fogg’s Gin Parlour stocks gins from Spain to South Africa. And finally, analysts from GlobalData look at alcohol trends on a global scale.

Representatives from each of the aforementioned institutions explained to Verdict exactly where the gin industry is at the moment.

They also revealed what they believe the future might hold for gin, and whether Brexit could provide a handbrake to the UK’s burgeoning gindustry.

The insights from the experts are fascinating but what’s equally interesting is the history of gin. Verdict takes a look at how it rose to the point it’s at now.

The history of gin

The origins of gin can be charted back to the Netherlands in the 13th Century. Back in those days, gin was far from its modern incarnation.

Known as genever, the drink was made by distilling malt wine to around 50% ABV (alcohol by volume).

As one might imagine, the drink wasn’t particularly drinkable, so it was softened with herbs and spices. Juniper berries were added to the drink for their supposed medicinal properties.

Depending on how it was distilled, the resulting alcohol tasted similar to vodka or whiskey.

Originally, these drinks were sold in pharmacies for medicinal use. They could be prescribed to alleviate kidney ailments, gout, or gallstones.

The drink was discovered by the British after English soldiers encountered it while fighting in Antwerp, assisting the Dutch against the Spanish in the 80 Years War of the late 16th and early 17th Century.

They were known to drink genever before battle due to its supposed calming properties. Veronique Beittel author of Genever: 500 Years of History in a Bottle claims this is where we get the phrase ‘Dutch courage’.

English distillers began to make their own version of genever, shortened to ‘gin’. It slowly gained popularity, before seeing major success when William Of Orange, ruler of the Dutch Republic, took the throne in the Glorious Revolution and shared his enthusiasm for the drink.

Traditional genever still exists in continental Europe where it is popular in the Netherlands, Belgium, and adjoining parts of France and Germany. 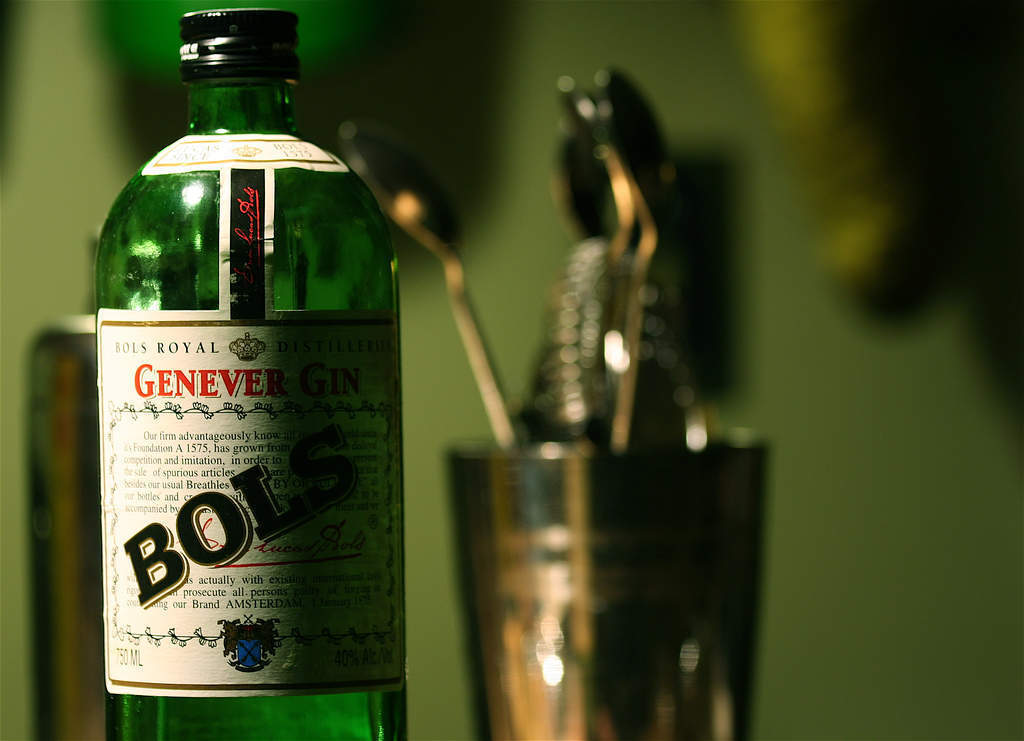 It’s important to remember that, at the beginning of the 18th Century, choosing alcohol over plain water was a healthy choice.

While that might baffle modern sensibilities, it was very much the case. Plain drinking water was often unclean, especially in cities. Meanwhile, distilled alcohols were filtered much better.

That accounts for some of the reason why early gin was able to gain such a foothold.

Another reason was political strife between the British and French at the time. Due to ongoing hostilities, the British increased levies on French brandy.

The government encouraged the gin craze by reducing taxes on the distillation of spirits and removing the need for licenses to distill spirits.

This latter part meant that, unlike those brewing beer, distillers could have a small workshop rather than a pub which would have to provide food and lodgings.

In addition, gin could be created fairly cheaply and easily from homegrown British produce. Poor quality barley that wasn’t good enough for brewing beer could be used to make gin.

In some cases, juniper berries were replaced with turpentine, the same stuff used to produce wood varnish or to thin oil-based paints.

The low price of this early gin helped make it a favourite among the poor. According to 18th Century author Daniel Defoe, in 1727 over half of London’s 15,000 drinking establishments were dedicated to gin.

Unfortunately though, the English government did not realise that it had unleashed a monster by ushering in the gin craze.

In time, gin would become like modern drugs, and just like with drugs, the government went to war on it.

Records show that by around 1721, gin was developing a bit of a negative reputation. Magistrates in Middlesex referred to gin as “the principal cause of all the vice & debauchery committed among the inferior sort of people”.

Widespread drunkenness became an epidemic, especially in the city of London.

Finally realising what they’d unleashed by allowing the gin trade to flourish, the government took action with the Gin Act of 1736. It heavily taxed gin and required liquor establishments to carry a special license to sell gin.

This license cost £50 per year, the equivalent of around £6,000 in 2018, according to the National Archives. Unfortunately, this strategy did not prove effective and only two licenses were taken out. As a result, gin was totally prohibited.

Unfortunately, as with alcohol prohibition in the US, this had the opposite effect. Gin became more popular than ever. Pushed underground by government regulation, the illegally distilled gin was often much more alcoholic and likely to cause poisoning.

The most famous picture of this era is William Hogarth’s Gin Line.

The print depicts a street filled with rowdy, drunken gin drinkers who look to have particularly miserable lives. It is contrasted with Hogarth’s other famous print, Beer Street which depicts jolly, prosperous, happy members of society who drink beer. 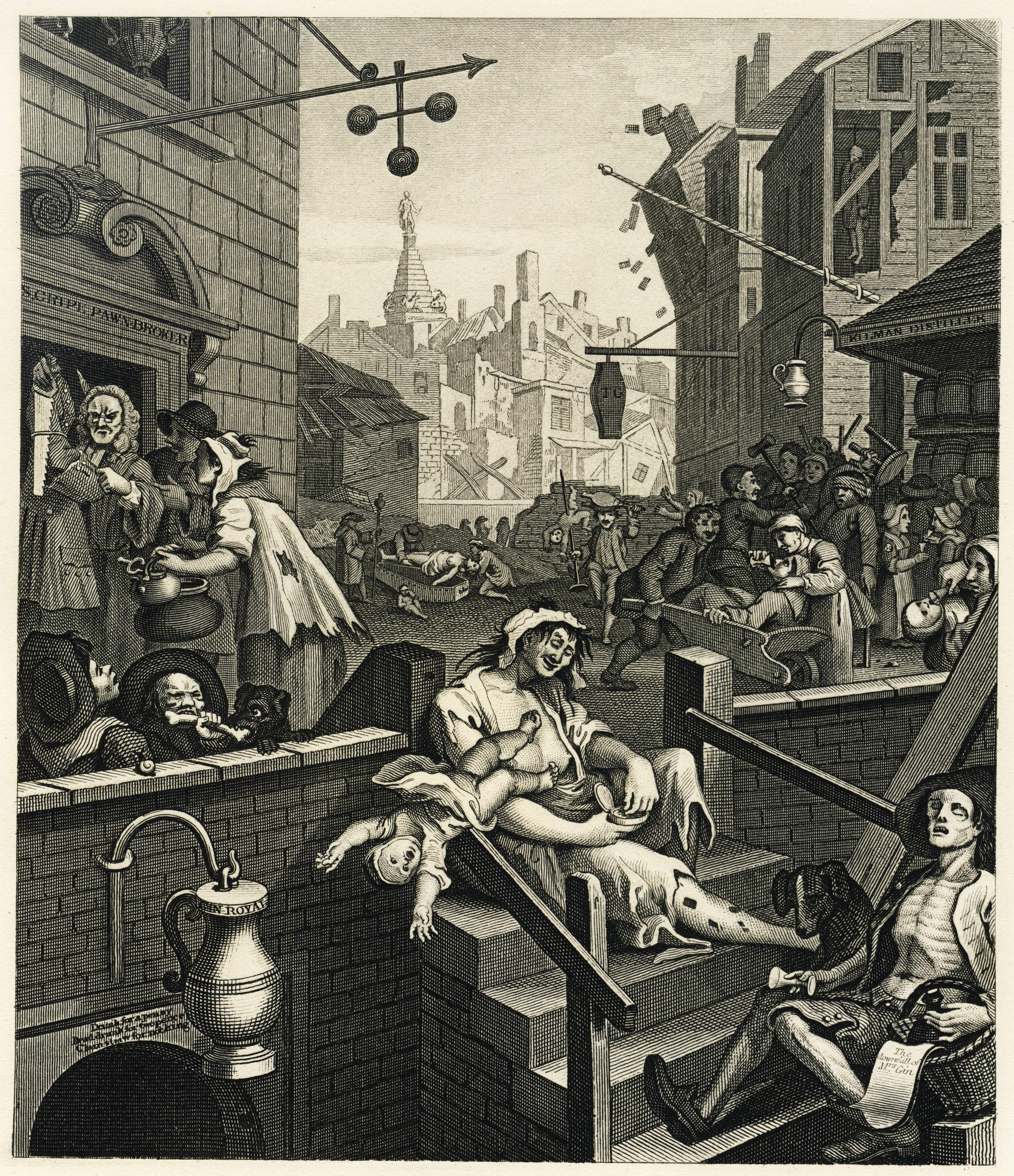 In 1743, the government was forced to repeal the Gin Act of 1736 due to the sheer volume of people flouting it. Also, informers on gin sellers were often the targets of violence.

This lowered taxes on gin, but made it illegal to sell gin from any premises whose rent was less than £10 per year (£1,200 in 2017). This was to ensure gin was only sold from reputable premises.

Death of the gin craze

As a result of this new trend law, the gin craze began to wane.

In addition, a series of poor harvests increased the price of grain. This made it much more difficult to afford to produce gin.

Not only that, but as the population of the UK increased, wages stagnated. Suddenly the British public could no longer afford to drink gin so much and the craze died.

The government attempted to make this arrangement permanent by temporarily banning people from manufacturing spirits using domestic grain. At the same time, they passed laws more firmly regulating the production of gin.

By the turn of the 19th Century, the gin craze had all but ended.

There was only one major gin manufacturer at that point: Alexander Gordon. His gin brand, Gordon’s survives to this day where it controls nearly 50% of the total UK gin market. Gordon’s selling point was that his gin was distilled three times for purity.

It might only be the Opening Ceremony, but we’re already going for best performance on ice… #ShallWe? #LetTheGamesBeGin pic.twitter.com/KKpPHglL8u

Both in physical appearance and public perception, gin was cleaner and clearer than ever before.

Some time between 1826 and 1831, the gin distillers invented the column still. This device made distilling gin easier, cheaper, and cleaner than ever before. This new gin came to be called ‘London Dry gin’ and sparked a gin renaissance.

In response to an increasingly cheap liquor license for pubs, gin sellers began to consider alternative experiences they could offer.

The answer was the Victorian gin palace. These were cafés or bars, often tiled with large elaborately decorated mirrors, and gas lighting. Gin palaces sold gin exclusively and became known for being brightly lit places, in contrast to pubs.

Gin became the preserve of the sophisticated, while beer was the opposite. The situation had completely flipped from the days of the gin craze.

Elsewhere, out in the tropical British colonies gin had found another use. Colonists used gin to mask the bitter taste of quinine which they drank to resist malaria. Quinine was dissolved in carbonated water to become what we now know as tonic water. And thus, gin and tonic was born.

As the colonists transported gin around the world with them, the rest of the world’s obsession with the spirit began too.

Gin remained popular until the late 1950s and early 1960s. Unfortunately, another spirit arrived on British shores to do battle with gin.

Unfortunately, the generation who’d enjoyed the first gin cocktails in the 1920s and 1930s were aging, and the youth of the 1960s were looking for a new drink.

In comes Russian import, vodka. On the back of a series of slick, exciting advertising campaigns vodka cemented its place in British drinking culture.

Gin became increasingly unfashionable over the years, as vodkas popularity grew and grew. Gin started to be seen as a drink for old people or alcoholics.

However, all that changed in 1999 with a new arrival on the gin scene: Hendrick’s.

In 1999, Hendrick’s Gin launched. The creators of the brand, William Grant And Sons, were already popular for their Scottish whiskies which had achieved world renown. In essence, gin was an experiment which would present no great loss if it failed.

Not everything in life is a bed of roses and cucumbers. But somethings are. Photo Credit: @hendricks_genius pic.twitter.com/77l7DoeOLJ

The success of Hendrick’s Gin acted as a catalyst for other small, bespoke gin brands to get back into the game. The weight of the craft gin movement has lead to a swell in the number and kinds of gin out there.

In 2005, Fever-Tree tonic launched, acting as a premium mixer to accompany this new wave of ultra-fashionable craft gins.

As of 2017, gin’s popularity has officially outstripped vodka. A survey from the Wine And Spirit association found in 2016 21% of consumers said they drank gin, and 26% said they preferred vodka.

As for what’s next for gin, scroll back up to see our documentary on that very subject.

And if all that history proved thirsty work, here’s a gin expert to tell you how to make the perfect serve of gin and tonic: