The UK Government is expected to finally decide whether to allow Huawei infrastructure in its 5G network tomorrow, but the public is divided on whether the Chinese tech giant should be trusted.

In a poll conducted by Verdict, which 1,066 readers voted in, more people said they did not believe Huawei was a national security threat to the UK, but the margin was almost as close as the Brexit referendum.

53% of those who voted said they did not think Huawei posed a threat to the UK, while 47% said they did think the Chinese tech giant was a security threat. 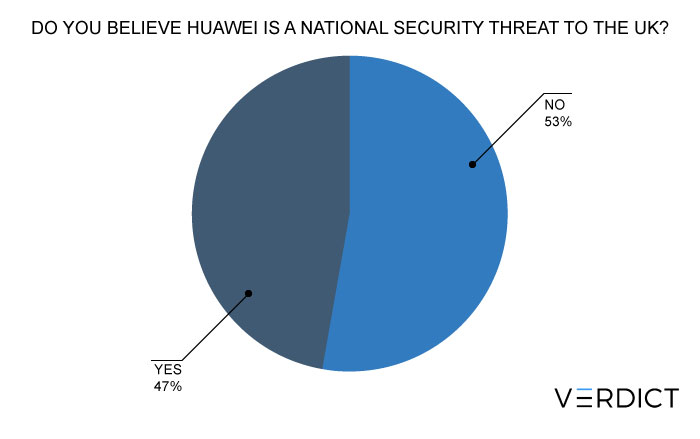 UK under pressure from all sides over Huawei 5G

The results come as the US has made a last-minute plea not to use Huawei technology in UK 5G infrastructure. This came via US Secretary of State Mike Pompeo, who in a tweet implied that the country’s sovereignty would be at risk if it allowed the company to be involved.

The US has made repeated efforts to get the UK to ban Huawei from its 5G infrastructure, arguing that the Chinese government could use it to conduct espionage activities.

Huawei has repeatedly denied that this is the case, arguing that there has never been any evidence to support these claims.

The US has argued that the UK’s role in the Five Eyes intelligence sharing alliance is at stake, with multiple members of US government, including President Donald Trump himself, making the case to the UK government over the last few weeks.

However, the UK is also under considerable pressure to use Huawei infrastructure.

Furthermore, Huawei 5G infrastructure is generally believed to both the most advanced and the cheapest out of viable options.

As a result, BT and Vodafone, two of the biggest telecoms companies in the UK, have lobbied the government not to comply with the US’ request.

Boris Johnson even urged the US to suggest a viable alternative to Huawei for UK 5G, implying that what it was demanding was impractical.

Given this challenging position, the UK is widely expected to decide to allow Huawei infrastructure to be used in non-core parts of the network, while banning it from the most critical parts of the 5G network – a compromise that will not be well-received by the US, but will be workable for telecoms operators.