The 2020 annual report released by Chinese telecommunications vendor Huawei Technologies shows the company’s share of revenue coming from its home market rose sharply in 2020, increasing to nearly two-thirds of total revenue. In total, Huawei reported revenue of CNY 891.4 billion, or $136.7 billion, in 2020. The company managed to increase revenue nearly 4% compared to the prior year – an impressive feat in the midst of a global pandemic.

However, it is clear that Huawei is more dependent on its home market than ever; sales in China grew by 15% in 2020 while sales in all other markets declined. In particular, sales in EMEA and the Americas both declined by double digits, reflecting a number of challenges, including the company’s denied access to the Android ecosystem for its handsets as well as the company’s exclusion from participating in 5G contracts in many countries. The company also pointed to significant challenges in its supply chain for components and intellectual property embedded in its network infrastructure and consumer products.

These multiple challenges clearly impacted Huawei’s overseas operations as never before; however, in truth, they accelerated a trend that has been in motion for over a decade. For the period between 2009 and 2013, Huawei relied on its domestic market for only one-third of its total revenue; since that time, the share of revenue coming from China has steadily increased, returning to a majority of its revenue starting in 2017.

That trend clearly accelerated in 2019 and 2020; as a result, Huawei has completely flipped from 2011 to 2021, with China now growing from one-third to two-thirds of Huawei revenue during that time. 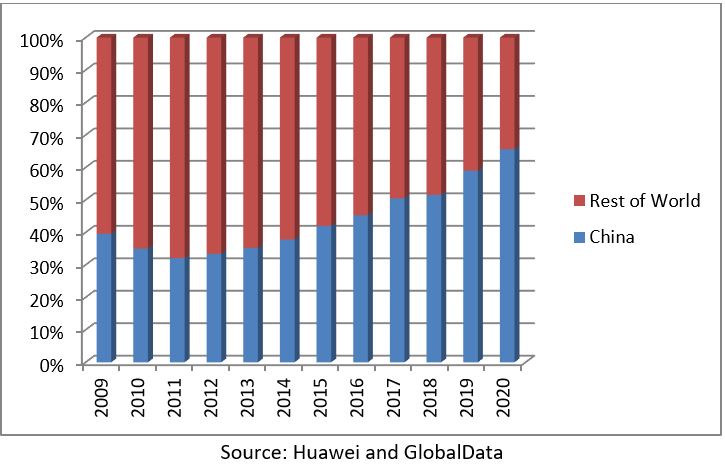 The good news for Huawei is that, thanks to the massive size of the Chinese market, the vendor would still be a formidable ICT presence even if it only catered to the Chinese market. For perspective, Huawei’s $90 billion in domestic revenue in 2020 would put it on par with the global revenue of Dell ($94 billion), exceed Intel ($78 billion) and IBM ($74 billion), and dwarf competitors like Cisco ($49 billion), Ericsson ($25 billion), and Nokia ($25 billion).

Unfortunately, while that is true, Huawei remains dependent on a global supply chain that includes a number of companies in the US, where Huawei-focused restrictions have posed major challenges. Speaking in March, Huawei Rotating CEO Ken Hu estimated that Huawei traditionally spends $10 billion-$20 billion on components and IP from US suppliers.

As a result, even if it were to focus exclusively on meeting domestic needs, Huawei either needs to: 1) further diversify its supply chain in non-US geographies, 2) look to the Chinese government to invest in domestic capabilities such as a more robust silicon ecosystem, or 3) hope that trade tensions with the US can be ratcheted down to a degree that Huawei can rely on US suppliers for the long term. However, Huawei appears to have learned the American proverb “once bitten, twice shy” – and has likely already concluded that heavy reliance on US suppliers may be hazardous to its health.