Hurricane Dorian is already battering the Bahamas, and as it bears down on the US state of Florida, a host of warnings are in place. But away from the usual safety advice, one more unexpected warning is being given to drone users.

Civilian drones are being increasingly used in emergency situations by law enforcement, first responders and infrastructure companies, many of which are made by world leader DJI.

But the company is concerned that not only will those that can help not be fully prepared, but that its large market of hobbyists could get in the way, which is why the company has issued a warning to both groups ahead of the arrival of Hurricane Dorian.

“First responders and utility companies today rely on drones to help people during emergencies, and DJI expects our products will play a critical – even lifesaving – role in responding to this looming disaster,” said Mario Rebello, DJI Vice President and North America Regional Manager.

“We want to make sure authorised drones can do their jobs safely and effectively in the days ahead, and that other drones stay out of rescuers’ way.”

Drones have been a staple of disaster response since Hurrican Harvey in 2017, when they were used to assess damage to key infrastructure in Houston, Texas.

The following year, the North Caroline Department of Transportation embraced drones for response efforts in the aftermath of Hurricane Florence, carrying out over 260 drone missions.

In order to ensure such missions can operate safely, the US Federal Aviation Authority issues permissions to fly in such circumstances through its Special Governmental Interest (SGI) process.

This approves applicants with either a Part 107 Remote Pilot Certificate or an official SGI waiver to conduct drone flights in the aftermath of events such as Hurricane Dorian.

Those who are expected to be authorised to fly following this hurricane include public safety agencies, utility operators and media outlets. 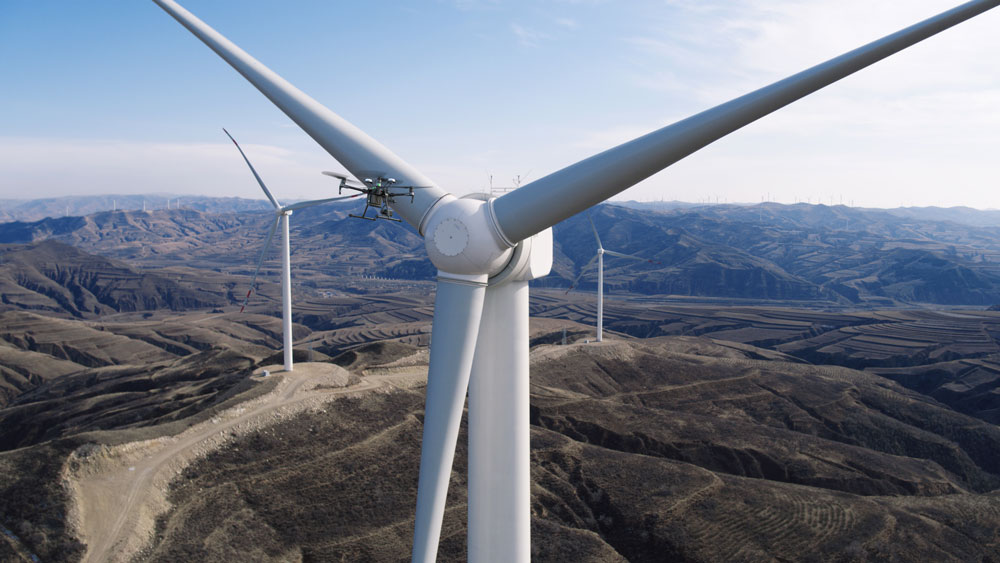 Inspection of key infrastructure, such as wind turbines, is a vital use of drones following hurricanes.

How authorised drone pilots should prepare

First up, they recommend that users who are either planning to or may need to fly DJI drones in geofenced areas – that is, areas that are temporarily locked to non-authorised users – make sure they have applied to have their drones unlocked in these areas now.

DJI drones used by the Florida Power & Light Company have already had their geofencing restrictions unlocked, as will those within DJI’s Qualified Entities Program, who are mainly public safety agencies.

However, others with authorised reasons to be in the air, including some government agencies, will need to apply to unlock geofencing through DJI’s website.  The company recommends this is done now not only because for non-government agencies approval may take some time, but also because it requires an internet connection, which may be hard to come by as and when Hurricane Dorian hits.

Furthermore, DJI recommends drone pilots update to the latest versions of firmware not only for their drones, but also batteries and remote controllers, as well as any flight control apps they use.

The company also recommend that all batteries are charged fully, to ensure users aren’t stuck with drones they can’t use.

While some hobbyist drone users may be tempted to fly in the aftermath of the hurricane, particularly to capture footage of its impact, they are being warned to not to succumb to temptation.

With crowded airspace expected, consisting not only of authorised drones but also helicopters and aeroplanes, rogue drones could significantly impact emergency response efforts, risking lives in the process.

The fines for non-compliance are not small, either. Any drone pilot who gets in the way of emergency response work could be fined as much as $20,000.

Read more: In the wake of Notre Dame, has the time come for firefighting drones?