The IBM share price has opened down after the announcement of a landmark takeover of open-source cloud software provider Red Hat. The acquisition, which saw the company acquired for a total value of approximately $34bn, is the largest in Big Blue’s history.

After closing at 124.75 on Friday, IBM Common Stock opened this morning at 119.17 on the New York Stock Exchange. The shares have since seen some recovery, to a current value of 121.75. This followed muted pre-market trading that indicated the acquisition had failed to boost the company’s share price. 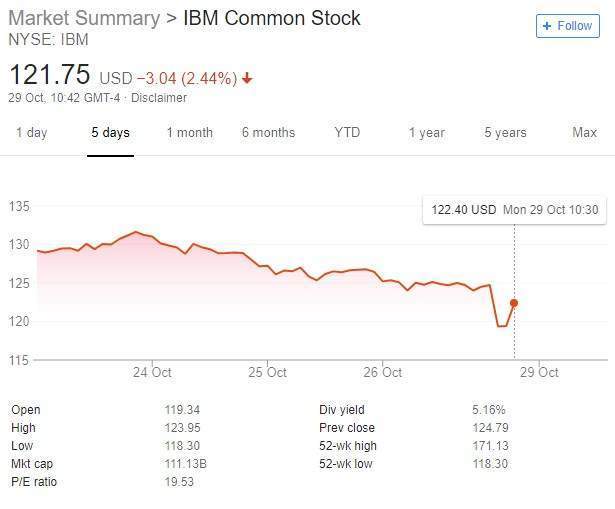 The IBM share price has been on a downward trend since the start of October. Mixed results in its third-quarter earnings announcement earlier this month, which saw the company miss revenue expectations accelerated this, with shares dropping dramatically following the earnings announcement from 145.04 to 134.723.

However, they have continued to steadily decline, and there is little to suggest the Red Hat announcement has made any impact to this. 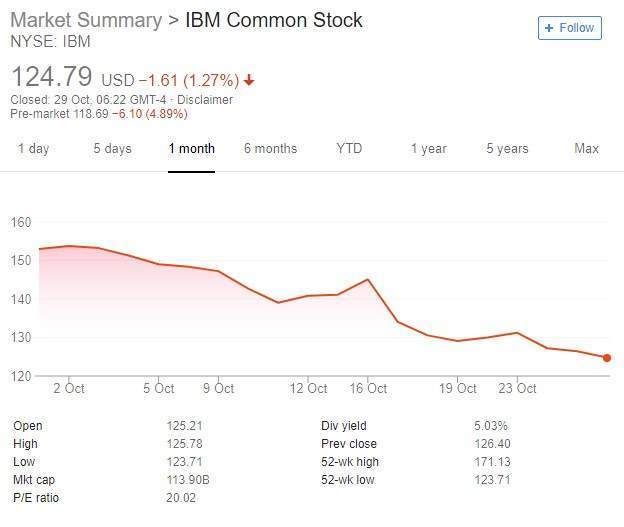 The acquisition of Red Hat is key for IBM, as it sees the company grab a key stake in the cloud storage market – currently dominated by Amazon Web Services (AWS).

For IBM, it is an opportunity to reshape itself as a key player in the technology industry, as opposed to the dusty giant it is often seen as.

“The acquisition of Red Hat is a game-changer. It changes everything about the cloud market,” said Ginni Rometty, IBM Chairman, President and Chief Executive Officer, in an announcement of the acquisition.

“IBM will become the world’s #1 hybrid cloud provider, offering companies the only open cloud solution that will unlock the full value of the cloud for their businesses.”

However, with AWS already firmly established as kings in this sphere, IBM considerable work ahead – although the company is optimistic on this front.

“Most companies today are only 20% along their cloud journey, renting compute power to cut costs,” said Rometty.

“The next 80% is about unlocking real business value and driving growth. This is the next chapter of the cloud. It requires shifting business applications to hybrid cloud, extracting more data and optimizing every part of the business, from supply chains to sales.”