Imagination Technologies — once one of the UK’s darling tech firms — has been hugely sold off this morning after iPhone maker Apple said it will stop using its intellectual property within two years.

The details were disclosed to investors this morning by Imagination.

There was some silver lining however, as Imagination said that while Apple is developing its own technology, it would be difficult without infringing patents.

The technology group licenses its processing designs to Apple — which also holds an eight percent stake in Imagination — and receives a small royalty on every graphics chip used in a iPhone, iPad and Apple Watch.

Apple has used Imagination’s chip technology for years and came close to buying the Hertfordshire-based firm a year ago.

Apple has not presented any evidence to substantiate its assertion that it will no longer require Imagination’s technology, without violating Imagination’s patents, intellectual property and confidential information. This evidence has been requested by Imagination but Apple has declined to provide it.

Further, Imagination believes that it would be extremely challenging to design a brand new GPU architecture from basics without infringing its intellectual property rights, accordingly Imagination does not accept Apple’s assertions.

Investors were not swayed however, driving the company’s share price down by around 70 percent one hour on from the market open in London. 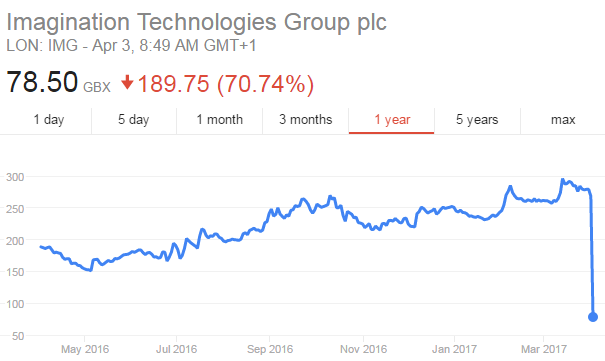 Imagination received £60.7m in licence fees and royalties from Apple last year, which is expected to rise to £65m in the year to 30 April.

Analysts at N+1 Singer cut their recommendation on the company to a “sell”, writing: “If the group is unsuccessful in challenging Apple’s position, we would expect the group to need to make significant operational changes to align the cost base to the new revenue profile. Given the uncertainty around its largest revenue stream, and current net debt position, we move to sell.”

In March last year, Apple said it had held “some discussions” to acquire Imagination Technologies but didn’t have plans to make an offer at that time.

Imagination has faced difficulties recently due to the on-going slow down in Apple’s iPhone sales.

Imagination’s exposure to Apple is around 50 per cent, according to analysts at Liberum. Rival UK tech firms Laird and ARM — recently acquired by Japan’s SoftBank — also derive some of their revenue from Apple but are less exposed.