Whether you like it or not, social media is a part of the way we live now. While some people would prefer to go back to a simpler time, before Facebook ruled the world, that just isn’t going to happen.

Technically the required age for most social media platforms is 13.

However, since all rely on users inputting their own birthdays, there’s nothing to stop younger users from just lying.

The onus is on each user to read these terms and conditions. However, the Children’s Commissioner For England, Anne Longfield says social media giants should do more to make their terms accessible to their youthful users.

The Children’s Commissioner For England is a public office independent of Parliament and the Government of the UK. The position is designed to speak for children and young people, especially marginalised ones.

The commissioner essentially gathers data and presents it to the UK Government and childcare bodies. The idea is that the Commissioner is the advocate for young people in the adult world.

In a study entitled Growing Up Digital‘, Longfield found most young people do not know what they’re signing up when setting up social media accounts.

In response, Longfield has ‘jargon-busted’ various website’s terms and conditions. Her child-friendly versions take the form of one page documents. These documents are available as free online resources for teachers. 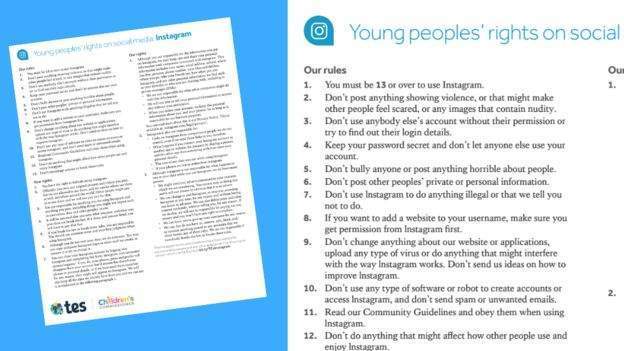 Anne Longfield argued that the reason she created these simplified versions of the terms and conditions is because:

The social media giants have simply not done enough to make children aware of what they are signing up to when they install an app or open an account. Their terms and conditions are impenetrable, even to most adults. Children have absolutely no idea that they are giving away the right to privacy or the ownership of their data or the material they post online.

However, Instagram are not happy with this characterisation. In a strongly-worded statement, Instagram accused Longfield’s resources of inaccuracies:

It is wrong to suggest we share young people’s personal information, contact details or content of direct messages with advertisers without their permission. Nor do we share details of who people are messaging with.

The latter, did at least say they’d work with the Commissioner to improve. Still, it’s clear that the social media giants are frustrated with how they’ve been presented by Longfield’s office.

That said, there are passages that do make the social media giants come off as pretty sinister. Did you know Facebook and Instagram can use your images however it likes without paying you for them?

The latter can even receive payments for them without passing those payments onto users. Or how about that if you break the law while using Snapchat and someone tries to sue them, you have to pay their legal fees?

Whatsapp have a clause that allows them to ban users at any time without giving a reason. Even YouTube collect data about the time, date and length of your phonecalls.

It’s easy to see why the social media giants are upset.

These documents either misinform the public about their aims or potentially lay bare all their nefarious doings.

It’s hard to tell which. Still, that’s the price we all pay for access to social media and it doesn’t look like that’ll change any time soon…

Topics in this article: social media