Global politics is the biggest concern for insurance companies around the world right now.

According to an annual survey by Goldman Sachs Asset Management, politics is the number one macroeconomic risk that insurance companies are worried about. The survey incorporates the feelings of over 300 chief information and finance officers at global insurance companies, representing around 40 percent of the global industry assets.

This year, more than 50 percent of insurers placed political risk among the top three risks, compared to the 2015 survey when politics wasn’t selected as a top risk by any survey respondents, and last year when only three percent of respondents chose it.

It appears that the populist movement that has been sweeping across the globe, from the UK’s decision to leave the European Union last June, to the election of Donald Trump to the White House and the ongoing French presidential election have insurers concerned about what could happen next.

As well, Germany will also be heading to the polls later this year, where the right-wing nationalist party Alternative fur Deutschland (AfD) has been starting to make waves in state elections. 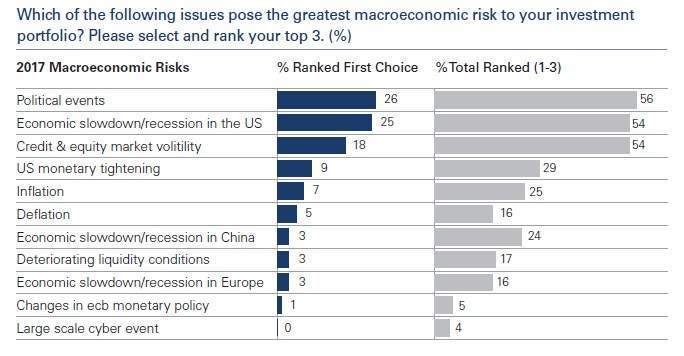 Alongside global politics as the top macroeconomic risk, the report found that the insurance market is concerned about economic slowdown in the US as well as credit and equity market volatility. It appears that the fears of a Chinese recession have dissipated, particularly across Asia.

A large-scale cyber event was only listed in the top three of concerns by four percent of those surveyed. This is interesting considering the rise in cyber attacks and the news a few weeks ago that UK companies hit with data breaches have lost £42bn since 2013.

In terms of Brexit, the report said this could have a wider impact on European insurers.

“The outcome of the EU referendum in the UK may challenge the ability of European insurers to operate across the continent out of a single hub.”

Lloyds of London, the world’s biggest specialist insurance market, announced it would be creating a new European subsidiary in Brussels, the day after UK prime minister Theresa May triggered Article 50, and other companies could choose to follow suit.